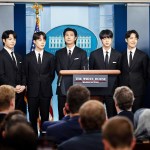 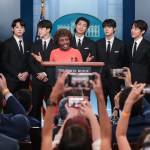 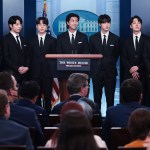 Bio:
Jin (born Kim Seokjin on December 4th, 1992 in Anyang, Gyeonggi Province, South Korea) is a South Korean singer and member of the K-pop group BTS. With BTS, he’s released four studio albums — Dark & Wild, Wings, Wake Up and Youth — along with five EPs (O!RUL8,2?, Skool Luv Affair, The Most Beautiful Moment in Life, Part 1 and Part 2 and Love Yourself: Her.) Along with BTS, he won the Top Social Artist Award at the 2017 Billboard Music Awards.

Best Known For:
Jin is best known as a member of BTS and for being Worldwide Handsome.

Personal Life:
Jin majored in film at Konkuk University in Seoul, graduating in February 2017. He is currently studying further at Hanyang Cyber University.

Finally! BTS’ performance on ‘Jimmy Kimmel’ aired today, Nov. 29, which means we can see the whole, glorious thing in high-definition. Watch the guys slay with ‘DNA,’ ‘Save Me’ and more!