Ayesha Curry is not having it from the haters coming after her and Steph Curry’s marriage. The Seasoned Life author shut down a troll that accused her of having an open marriage. The feud started on an Instagram post celebrating the Gold State Warrior’s GQ cover shoot. “Good gracious God almighty,” she wrote in the caption with some thirst-filled emojis. “my baby’s @gq cover shoot.” However, one hater had to crash the celebration. “But yet you still want an open relationship smh,” they wrote in the comments section. “If I were him you woulda been sent to the streets already.” 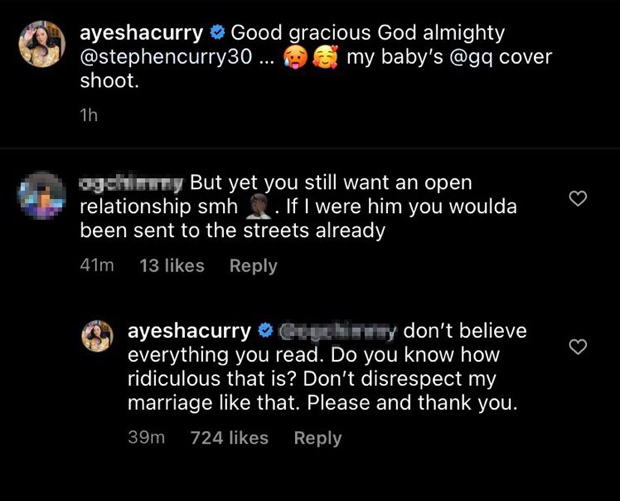 While celebrities don’t always entertain their trolls, The Eat. Learn. Play. founder let her hater know that it wasn’t ok to come for her marriage. “don’t believe everything you read. Do you know how ridiculous that is?” She asked in response. “Don’t disrespect my marriage like that. Please and thank you.” The critic didn’t have anything to say after that reply.

The mom-of-three is Steph’s number one cheerleader and always announces and celebrates her husband’s victories. Most recently, she congratulated the basketball player for breaking the NBA’s 3-point record. “2974 and counting. Congrats my baby. I love you so much! You did that. To God be the glory. I’m so proud of ya @stephencurry30,” she wrote on Instagram. She and their son Cannon Jack Curry also made it to the court to celebrate Steph’s 33rd birthday and yet another winning game.

Unfortunately, almost every celebrity marriage has to fend off rumors and the same is true for Steph and Ayesha’s. The pair was rumored to be in an open relationship in December 2021. “Have it on good authority that this well-known NBA couple aren’t as faithful in love as their social media and image make them out to be!” one user sent to gossip Instagram page @deuxmoi, as per The Jasmine Brand. “They both have side hookups and flings but keep it very private to keep up the perfect family image they show to the world. I was shocked to learn, they’ve been together for so long.” It’s worth noting the rumor was sent in by an anonymous tipster and there’s no proof backing it.

Ayesha, however, has made it clear in the past that she doesn’t like to share her man. “The ladies will always be lurking, hoping for their moment and waiting. But for me, I honestly hate it,” she confessed during an appearance on Jada Pinkett Smith’s Facebook Watch show, Red Table Talk!  Facebook Watch show, Red Table Talk! Regardless of the haters who question their marriage, Ayesha and Steph seem to be living their best lives.