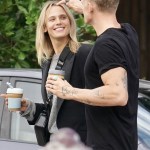 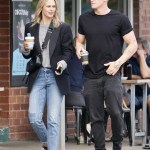 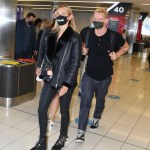 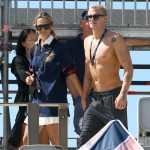 They’re having the time of their lives! Cody Simpson and his girlfriend Marloes Stevens looked smitten as they did the ‘Dirty Dancing’ lift!

Few things are more romantic than pulling off the iconic Dirty Dancing lift, but with Cody Simpson‘s muscles, that feat isn’t too far fetched! The professional swimmer and his girlfriend Marloes Stevens shared a series of sweet photos attempting the move, made famous by Patrick Swayze and Jennifer Grey in the 1987 film. In front of a cotton candy sky sunset over the water, Marloes puts her hands on Cody’s shoulders as he grabs her hips, ready for the big lift! The next photo shows the couple about halfway there, with Cody not getting his girlfriend fully over his head a la Swayze. The final pic shows Marloes planting a kiss on her man’s cheek as she holds him up on her hip. They’re too cute!

Cody, who is currently training to qualify for the Olympic swim team, started dating Marloes in September, after his romance with Miley Cyrus. Just two weeks ago, he opened up about his relationship with the “Malibu” singer, calling it a “phase.” “I’d known her for a long time at that point,” he said. “She’d kind of acted almost as like a, not as a mentor, but she was always a heightened creative person.” He added, “Everything ended fairly amicably. It was just one of those phases I guess you go through and you learn a lot from it.”

Now, he and Marloes, a model, seem happier than ever together. As Cody preps for his Olympic debut, HollywoodLife.com is hearing EXCLUSIVELY that his GF is “so proud” of him. “Marloes has been supporting Cody while he’s busy preparing and training to compete in the 2021 Australian Swimming Trials in Adelaide (South Australia),” the insider told HL. “The trials take place from June 12th through the 17th and Cody’s prepared to give everything he’s got in order to gain a ticket to Tokyo to compete in the Olympics.”

They continued, “Marloes is so proud of how far he’s come and she wouldn’t want to be anywhere else than right by his side throughout this journey…Cody always dreamt of getting to the Olympics since he was a kid, so this just feels like a natural progression for him. Regardless of this current Olympic trial outcome, Cody plans on dedicating himself to at least a four-year plan. Swimming is in his DNA; he was born to do it.”