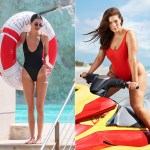 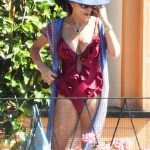 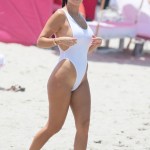 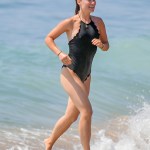 Katy Perry and her precious baby girl, Daisy Dove, looked so sweet as they bonded on a Hawaiian beach! See the photos of the mother-daughter pair, joined by Katy’s love and Daisy’s dad, Orlando Bloom!

Baby’s first beach day! Katy Perry looked completely in her element as she cradled her precious six-month-old daughter, Daisy Dove, during a trip to a beach in Hawaii on Wednesday, March 3. The “Firework” singer, 36, was spotted wearing a strapless purple one-piece by Eres while holding her infant daughter, who sported a tropical patterned, long sleeve swim shirt, pink bottoms over her diaper, and a little pink sun hat! You can see the pictures here.

Katy and her darling daughter were, of course, joined by Katy’s fiancé and Daisy’s doting dad Orlando Bloom. At one point during the family’s excursion, Orlando carried his little girl in his arms. The Lord Of The Rings alum, 44, sported a pair of small, black swim trunks and was seen cradling his daughter as the two made their way across the sand. It was such a special outing for the two parents and their baby girl, and both Katy and Orlando appear to be totally coming into their own during this exciting new chapter!

While the trio has been in Hawaii, both Katy and Orlando have been spotted out with their daughter on comforting walks. On February 18, Katy was spotted taking a stroll with her six-month-old, who reclined in her stroller. Just days later, on February 28, Orlando was seen taking a walk with little Daisy strapped to his chest in a small orange papoose! It was such a sweet sight, and the couple has definitely earned their quiet getaway.

The family’s excursion to Hawaii is definitely a welcome break for hard-working mom, Katy. The singer wrapped filming the audition episodes of American Idol and has been enjoying the much-needed downtime with her family ever since! Katy has been an incredible voice of encouragement for many contestants on the new season of Idol, and it’s so clear that the newly-minted mom is embracing this exciting new time in her life.

Katy even opened up about balancing her time between her family and her job as a working mom. “I’m so grateful for this opportunity and for this job, and to be able to continue to inspire other people to go after their dreams,” Katy told ET in October 2020. “I mean, my life just feels very full and whole. And you know, it’s hard a little bit these first couple of days away and not being able to be there,” she confessed, referencing the time away from her infant daughter.

Fortunately, Katy’s had the incredible love and support of Orlando to help her every step of the way. “Daddy’s doing a great job,” she continued, praising her adoring beau. “Daddy has stepped in. I’ve seen the Bjorn on him, I’ve seen him with the bottle, I’ve seen all the pictures. It’s all good.”

Katy and Orlando have absolutely been living on Cloud Nine since they welcomed their baby girl in August 2020. Orlando is also the dad to 10-year-old son Flynn from his previous marriage to model Miranda Kerr. But with the addition of sweet little Daisy, Katy and Orlando couldn’t look happier, and we cannot wait to see more of the little family in the future!