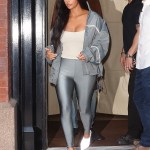 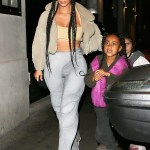 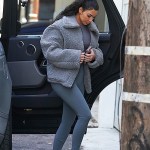 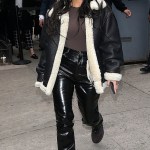 Kendall Jenner isn’t retiring her Yeezy’s just yet! On the same say her sister Kim Kardashian file for divorce from Kanye West, the model rocked her Resin slides out in West Hollywood.

Kendall Jenner, 25, certainly loves her Yeezy slides. The Keeping Up With The Kardashians star proudly rocked a pair Kanye West‘s sold-out resin style ($55) as she stepped out in West Hollywood on Friday, Feb. 19. The style choice could seemingly be a sign of support for the Jesus Is King rapper after her sister  Kim Kardashian, 40, filed for divorce from Kanye. Kendall kept her hair back as she hit up a trendy juice bar in the area with a friend. The duo could be seen sipping on orange-colored beverages as they walked out of the store.

Kendall — who recently launched tequila brand 818 — kept the rest of her look fairly casual. She rocked her trademark brunette locks back in a low key pony tail, opting to sport a pair of black sunglasses and a nude colored face mask from Kim’s SKIMS shape wear line. The Stuart Weitzman model also showed off her lengthy legs in a fitted heather gray pair of leggings, finishing off her ensemble with a cropped white hoodie and matching socks. She carried a reusable tote back over her right shoulder that read McNally Jackson Books — a well-known independent bookstore in the SoHo area of New York City.  The bag appears to be a favorite of Kendall’s as she’s worn it twice earlier this month: once to a pilates class on Feb. 1, and again on Feb. 3 as she left a skincare clinic in Beverly Hills.

After months of reports, sister Kim reportedly filed for divorce from Kanye after nearly seven years of marriage on Feb. 19. According to the same reports, the KKW beauty founder has requested joint physical and legal custody of the couple’s four children North, 7, Saint, 5, Chicago, 3, and Psalm, 1. It was also noted that the split — which is being handled by celebrity divorce lawyer Laura Wasser — is “amicable.” The divorce filing comes months after Kanye’s presidential run, which lead Kim to speak out about Kanye’s struggles with bipolar disorder. “As many of you know, Kanye has bipolar disorder. Anyone who has this or has a loved one in their life who does, knows how incredibly complicated and painful it is to understand,” she wrote in July 2020 via her Instagram story.

“I’ve never spoken publicly about how this has affected us at home because I am very protective of our children and Kanye’s right to privacy when it comes to his health. But today, I feel like I should comment on it because of the stigma and misconceptions about mental health,” she added. More recently, HollywoodLife has reported that Kanye has continued to live at his Wyoming ranch while Kim remains at their Calabasas, CA home. On Feb. 3, eyebrows were raised as Kanye moved his massive collection of 500 pairs of sneakers out of the home, leading Kim to repurpose the space for a SKIMS show room.