The Weeknd thrilled fans with a collection of his smash hits as the Pepsi Super Bowl 55 halftime headliner on Feb. 7. Of course the 30-year-old brought out his killer tunes including “Blinding Lights” and more, yet he didn’t have any special musical guests at most Super Bowl halftime performers do. “I’ve been reading a lot of rumors,” he told the NFL Network ahead of the game. “There wasn’t any room to fit it in the narrative and the story I was telling in the performance. So, there’s no special guests, no.”

The Weeknd — real name Abel Tesfaye — ran through a series of tunes from all of his albums, including “Starboy,” “I Can’t Feel My Face,” “Earned It” and “The Hills,” making it a true show of his various career stages. He ended the performance with a series of male dancers with bandages on their faces, which was the aesthetic from his After Hours album.  Fans on Twitter were confused as to where any special guests were, with @MsLaurenB writing, “I love The Weeknd, a lot. But why did he think he could carry the halftime show alone????? Even Beyoncé had Chris Martin, the Chilli Peppers had Bruno Mars, and Katy Perry had Lenny Kravitz and Missy Elliot! #PepsiHalftime #SuperBowl”

In 2020’s Super Bowl 54 halftime show, two superstars were featured with Jennifer Lopez and Shakira sharing headlining duties. Thus there wasn’t a need for big time special guests with those two talents filling the precious time allotted, though J Balvin and Bad Bunny made brief appearances for the Latin-themed show in Miami. But in years past, there have been some real surprises when it comes to halftime show special guests.

At Katy Perry‘s Super Bowl XLIX halftime show on February 1, 2015, the “Firework” singer brought on Missy Elliott, where the rap legend performed snippets of her classics “Get Ur Freak On” and “Work It,” as Katy played her hype-woman. Katy also included Lenny Kravitz earlier in her set, as he joined in “I Kissed a Girl.” In that year’s instance, the guests added to an already electrifying show put on by Katy. 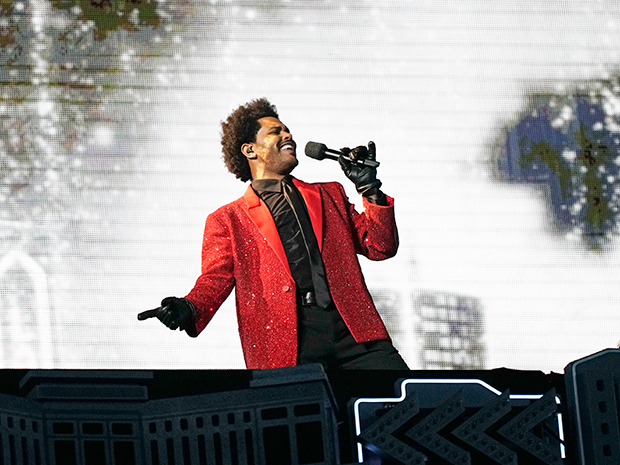 Probably the most epic special guests during a Super Bowl halftime show was in 2016 when headliner Coldplay got an assist from 2014’s headliner Bruno Mars to help liven things up in Santa Clara, CA Levi’s Stadium. Bruno came on and performed “Uptown Funk” with Mark Ronson after three more subdued tunes by the British quartet opened the show with less than usual fanfare.

Then Beyonce — who had just dropped her surprise single and music video for “Formation” the night before the big game on Feb. 6, 2016 — showed up with a huge team of female dancers on the field to perform the song live for the first time in person. AT THE SUPER BOWL. Where she wasn’t even a scheduled performer! Now that is badass.

The 39-year-old had headlined in XLVII’s 2013 halftime show, and proved she still owned it as her “Formation” appearance and her dance squad’s routine was the most talked about moment of the evening, featuring the big game between the Denver Broncos and Carolina Panthers. For the icing on the cake, she even hopped up onstage to join Bruno as they sang a blended medley of her “Single Ladies” than went back into his “Uptown Funk,” while poor Chris Martin and Coldplay had to concede that Bey was the winner of the Super Bowl halftime performance.