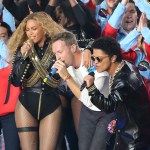 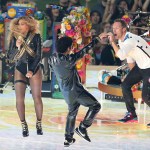 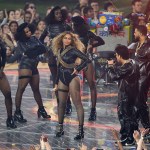 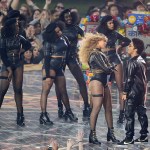 After 118 million views at last year’s show, Coldplay had huge shoes to fill (or fins, for Katy Perry’s sharks) — so, did their performance do it for ya?

“Dad, the worst that could happen is you’ll get turned into a meme. And after a month or so people will just forget!” That’s what Chris Martin‘s daughter told him before he took on Super Bowl 50‘s halftime show on Feb. 7. And with that, he totally slayed!
During the performance, Chris started on the ground and ran to stage to start his performance with  “Viva La Vida.” The stage was super colorful and let’s just say — he totally was ruling the world. Next up, he went into “Paradise,” which of course everyone loved. The crowd was going completely nuts! He went into a newer song next, rocking out to “Adventure of a Lifetime.”

Also wanted to point out the insane amount of color used in his performance. Even his black jeans he has colored safety pins along the outside! And with that — Bruno Mars took over for “Uptown Funk,” followed by Beyonce with “Formation.” However, at the end, he headed back ton stage to his piano to play “Fix You,” while video played highlights of the last 50 years at the SuperBowl. The lyrics were changed, and the audience held up signs to tend it with “Believe In Love.” Overall — let’s say it was an on-point performance.

When it was announced that Coldplay would be headlining the half time show, Chris told press, “So please, forgive us if we’re really no good.” As for who they thought would win the game — well the band didn’t really care, it seemed. “I think we’re fairly split down the middle between those of us who know almost nothing about football, and those of us who know absolutely nothing about football.”

So, how’d they prep for the show? “We decided to make it about togetherness and acceptance, and the things we believe in,” Chris added. Well, that’s what it was, for sure. Do you agree?

Did you love their performance, HollywoodLifers?