What global pandemic? Kylie Jenner, sister Kendall, 25, and several of the cosmetics mogul’s close pals are continuing to go about business as usual with their enviable luxury lifestyle. The 23-year-old and her BFF Stassie Karanikolaou, also 23, used the bright yellow walls of the $7k per night Ocean Castle Sol de Oriente in Costa Careyes, Mexico for their latest sexy Instagram shoot on Jan. 22. The ladies both modeled swimwear together that showed off their famous curves.

The bright yellow stucco walls made Kylie and Stassie’s tanned skin really pop. Ky went with a flesh colored bikini with a bandeau top and tiny string bottoms that tied at her hips. She could be seen bending over at the waist, with her famed derriere leaning against the wall above some gorgeous green foliage. Kylie was rocking her longest extensions to date, with her hair going all the way down to her knees.

Stassie added a pop of color with her one-piece swimsuit. It featured green and turquoise horizontal stripes and a high hip cut that went all the way up to her waistline, which had a string belt tied around it. Stassie held her hands against her thighs, as each of the ladies gave a sultry, closed eyes and closed mouth expression for the shot. 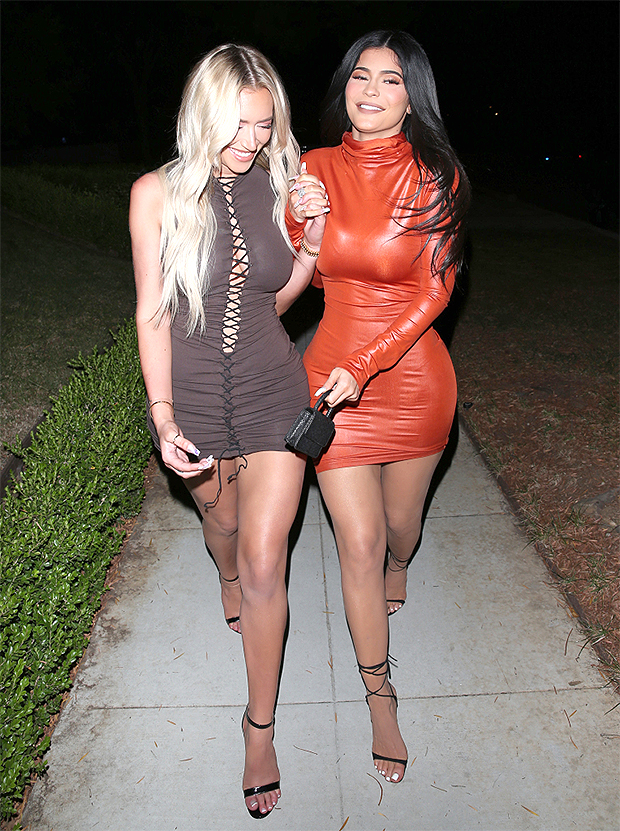 Stassie Karanikolaou and Kylie Jenner are now solid BFF’s after Ky’s falling out with Jordyn Woods. That means Stassie gets to go on amazing trips with her bestie Ky, including their current luxury oceanfront stay in a hilltop ‘castle’ in Mexico. Photo credit: SplashNews.

“That’s my best friend,” Kylie captioned the photo alongside Stassie. The two have been friends ever since they were growing up. But Stassie became Ky’s official number one bestie after longtime BFF Jordyn Woods 23, betrayed the Kar-Jenners and fooled around with Khloe Kardashian‘s then-partner Tristan Thompson, 29, at a Los Angeles house party in Feb. 2019. Now Stassie is the one who gets to join Kylie on her lavish trips and be part of the mother of one’s luxury lifestyle.

Stassie proved that she’s Kylie’s number one in a May 2, 2020 TikTok video where she gave a tour of the Kylie Skin founder’s new $36 million Holmby Hills mansion, where she’d been quarantining with her pal. “Ayo, my best friend’s rich check,” the blonde said in the video, as she showed off Ky’s furnished living room, cabana pool area and spacious car garage. She made sure to include Kylie’s $3 million white Bugatti Chiron, a black Ferrari with winged doors and red leather interior, a cream Rolls Royce, a red Lamborghini, and lastly, a black Lamborghini Urus.

Now Stassie gets to spend a luxury vacation in Mexico — south of Puerto Vallarta near the town of Playa Careyitos — in a $7K per night hilltop “castle,” with two bungalows and a tower.  The property comes with amenities including a live-in butler, chef and maids, and the infinity pool with the 360 degree ocean and land views that is something fit for a billionaire…which Kylie almost is. She was the highest earning star in 2020, taking in $540 million pre-tax after selling 51% of her Kylie Cosmetics brand to the publicly traded company Coty, Inc. for $600 million in November 2019. So it is very good to be Kylie’s best friend…and have her tell that to the world.