Bachelor Nation fans weren’t totally shocked when reports surfaced on Jan. 19 that Bachelorette Clare Crawley, 39, and fiance Dale Moss, 32, were ‘taking a break,” considering they only knew each other for a few weeks on the show before she decided he was her one and only. But Dale made it clear hours later in an Instagram post that their break was forever. Former Bachelor Ben Higgins thinks that what Dale did was totally classless, considering Clare hadn’t made any statements about the status of their relationship before the man she wanted “babies” with dropped the news to the world.

Ben said that he was surprised that Clare later ended up posting that she had “no clue” about Dale’s breakup statement and that it was “shocking” to her as well. “That she found out they were parting ways when everybody else did, I think that’s completely inappropriate on his part. I think it’s so wrong that that’s the way this went down,” the 31-year-old podcaster told Access Hollywood.

“I don’t know the behind-the-scenes and why they split, but there’s nothing that could bring it up to a place where she would be blindsided publicly and have to respond publicly without knowing where they stood. Like that’s just wrong. It’s a really bad move on his part” Ben continued.

He had some advice for Clare, who said in her IG stories post that she was “crushed” by Dale’s split announcement. “I would say, it’s gonna hurt. You’re gonna be reminded a lot and then life start to move on and then you start to heal,” he explained. “Breakups are unique because you can grow from them. I would just say take some time to reflect.”

Ben knows a bit about heartache, as the season 20 Bachelor got engaged to contestant Lauren Bushnell on the show in 2016, and they even went on to have their own Freeform reality show Ben and Lauren, Happily Ever After? The couple split in May 2017. She went on to marry country music star Chris Lane in 2019. 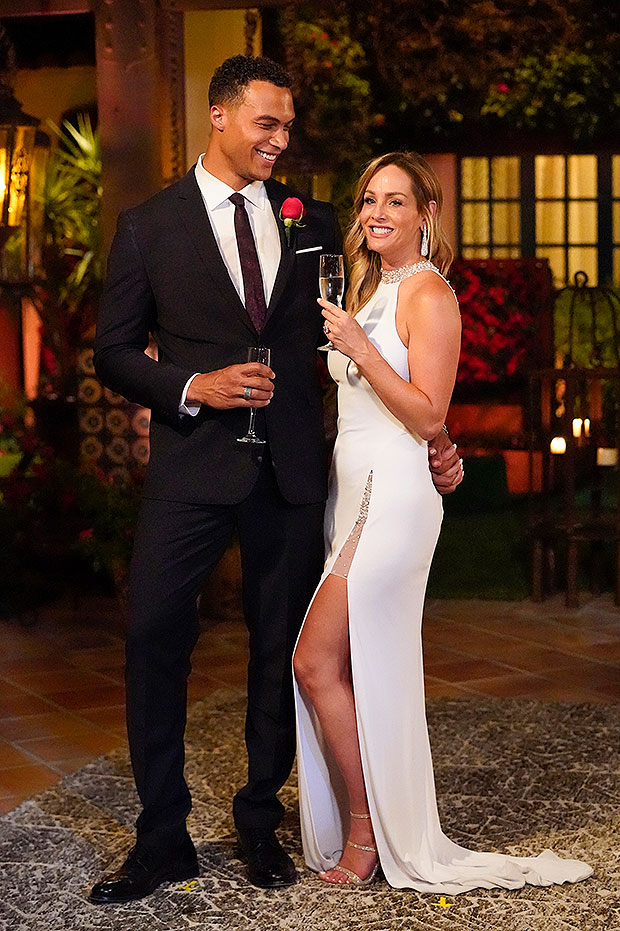 ‘Bachelorette’ Clare Crawley decided Dale Moss was the man of her dreams after only a few weeks of filming. The pair got engaged after just four episodes of the show. Photo credit: ABC.

After split reports surfaced about Dale and Clare on Jan. 19, the former NFL player took matters into his own hands and confirmed that it was true…at least in his eyes. He wrote in an Instagram post “I wanted to share with you all that Clare and I have decided to go our separate ways. We appreciate the love and support we’ve received from so many people, but this is the healthiest decision for both of us at this time.”

He added, “We strongly believe in leading with love and always remaining true to oneself – something our families have taught and instilled in us throughout our lives. We only hope the best things for one another.” Clare then claimed that he blindsided her, as she learned of his statement along with the rest of the world.

Two days later, Clare shared in a Jan. 21 Instagram post, “I was made aware of a ‘mutual’ statement at the same time you all were, so I’ve needed some time to really digest this. Speaking for myself, my intentions with this relationship have always been very clear, so the truth is I am crushed. This was not what I expected or hopes for and [I] am still trying to process this.”

Clare fell so hard for Dale during her abbreviated Bachelorette season that her stint lasted only four episodes, as she had no interest in any other contestant but Dale. They got engaged after knowing each other for only two weeks, and Tayshia Adams was then brought in to finish out season 16 as Clare’s replacement Bachelorette.