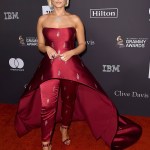 Bebe Rexha ’embraces the fact that she’s not a stick’ and ‘loves her curves’ despite the recent paparazzi pics that bothered her and prompted her to show off her swimsuit body with her own camera.

Bebe Rexha, 31, doesn’t want to hide her natural body and proved it after responding to some paparazzi pics that showed her frolicking in a $325 black “Greca Key” Fendi one-piece swimsuit on a Cabo San Lucas beach with her boyfriend, Keyan Safyari on Nov. 3. The singer showed off her own video of herself wearing the same swimsuit, which can be seen below, after she felt the pap pics didn’t represent her body in an accurate way, but her action had nothing to do with not being confident in who she is.

“Bebe is one to always say how she feels and she doesn’t want anyone feeling like she has anything to hide,” a source EXCLUSIVELY told HollywoodLife. “She embraces the fact that she’s not a stick but she’s very happy and comfortable in her own body and skin which is why she posted that video. She’s very proud of her body and comfortable with it and wants all women to feel the way she does.”

“She’s one to not care what anyone thinks ever and she probably will post something like that again,” the source continued. “She’s one of the most confident people out there and always wants to help other women feel the same way. She loves her curves and always tells her team to let her show them off. She has no problem showing skin.”

In addition to showing off a video of herself in the same swimsuit as the paparazzi photos, Bebe spoke to her fans and admitted to having “stretch marks” and “cellulite” and explained that she doesn’t feel the need to do anything to her body.

“I don’t do surgery. I’ve never touched my body,” she said. “Never done lipo[suction], never done any of that stuff. I’m trying to be healthy and respect what God gave me. And I like to eat and I also take medicine that makes it really hard for me to lose weight.”

When Bebe’s not showing off her filter-free body, she’s flaunting a makeup-free face and being open about struggling with dark under eye circles. The beauty recently appeared in a video for Vogue and in it, she talked about the circles and gave viewers some pointers on how to cover them up with makeup. “The one thing I found hard working with a lot of other makeup artists for me was getting rid of my dark circles, or some discoloration that I might have,” she said in the clip before showing off her beauty routine from start to finish.