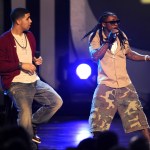 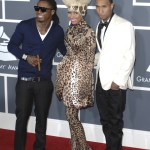 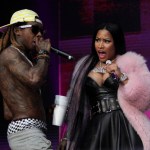 Following rumors that Lil Wayne’s girlfriend, Denise Bidot, dumped him because he endorsed Donald Trump, the rapper posted an apparent response on Twitter.

Lil Wayne took to Twitter to share a cryptic message about love with his followers on Nov. 4. The post came one day after fans started buzzing that the rapper and his girlfriend, Denise Bidot, had broken up. “I live the way I love and love the way I live,” Wayne wrote. “I’m a lover not a lighter [because] they burn out. I am an eternal fire and burning love, either leave with a tan, a 3rd degree burn, or stay and die in love. You’re sweating. Sincerely, the fireman.”

I live the way I love and love the way I live. I’m a lover not a lighter bekuz they burn out. I am an eternal fire and burning love, either leave with a tan, a 3rd degree burn, or stay and die in love. You’re sweating. Sincerely, the fireman.

Both Wayne and Denise have yet to actually confirm the reports that they’ve broken up. However, the speculation began when they unfollowed each other on Instagram, and she subsequently deleted her account altogether. She also tweeted, “Wow…can this year be over already” on Nov. 3. Fans are convinced that all of this stemmed from Wayne’s decision to endorse Donald Trump for president.

Wayne went public with his support for Trump by posting a photo of himself with the president on Oct. 29. Fans are convinced that this was the last straw for Denise, and they think that she dumped him because of the endorsement. Although Denise has not confirmed this herself, her Nov. 3 tweet was flooded with responses from fans applauding her for seemingly making this political statement.

The rapper and Denise were first linked in mid-June, and went Instagram official with their relationship later that month. Just two days before Wayne’s public show of support for Trump, Denise even praised his BET Hip-Hop Awards performance on Twitter. The pair’s most recent social media post together was in mid-October, when Denise shared a selfie with her man, which she captioned, “We cute.”

Since it was so rare to see Lil Wayne be so public with a relationship, fans were certain that the romance was getting serious. Unfortunately, things seem to be falling apart, but Wayne’s tweet shows that he appears committed and hopeful that the love won’t “burn” out.