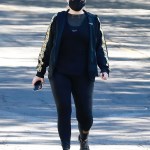 Rebel Wilson is letting us be witness to her fitness! The actress showed how she’s keeping off the 40 pounds she’s lost in 2020 by going for a healthy hike in black leggings.

Rebel Wilson continues to be the incredible shrinking woman. She’s already lost 40 pounds during 2020, and seems to have dropped even more weight since several red carpet appearances in September. The Pitch Perfect star went on a hike through L.A.’s Griffith Park on Oct. 29, and her athleisure wear showed how slimmed down she’s become. Rebel wore tight black Nike leggings with a metallic gold swoosh logo that showcased her trim and toned limbs.

Rebel wore a layered look on top, consisting of a black mesh Nike tank halter top with a cropped, short sleeved V-neck black t-shirt over it. The Aussie native added a long sleeved Nike zip-front athletic jacket in case any cold breezes blew in from the ocean on the sunny fall day in Los Angeles.

The 40-year-old was somehow spotted by the paparazzi, despite going completely incognito face-wise. She wore a black protective mask to prevent against the spread of COVID-19 that went from her chin to just under her eyes. Rebel then added large, dark cat-eye sunglasses. Finally, she tucked her blonde hair underneath a blue baseball cap, which appeared to have the Dallas Cowboys star logo on the front.

Rebel declared as 2020 began that it was going to be her “year of health” and she certainly has stuck to that goal. She was actually helped by spending the spring quarantined at home in her native Sydney. There she was able to concentrate on her diet, worked on controlling her emotional eating habits and focused on her exercise goals without work and travel getting in the way. That laid the foundation for her incredible 40 pound weight loss.

On June 13, Rebel called in to Australia’s Nova 96.9’s Fitzy and Wippa radio show to give an update on how her “year of health” was going as she hit the six month mark. “It’s hard!” she declared. “I theme my years, last year was the year of love and yeah that didn’t work out. So I was determined that this year is the year is health and I’m determined to succeed in this mission.” Not only did she come out victorious in her health goal, she caught up on her “year of love” as well.

Rebel has been dating handsome Anheuser-Busch scion Jacob Busch, 29,  ever since Sept. 2020. They made their debut as a couple at a black tie gala in Monaco on Sept. 24, and have been going strong ever since. After France, they headed to Cabo San Lucas, Mexico where Jacob romanced Rebel with a romantic dinner on the beach, complete with a movie screening and a warm fire pit. While he’s been at her side for the fun getaways and even a few trips to the gym together, Rebel still keeps some of her workouts as me-time.