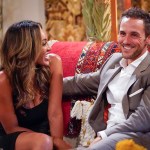 Clare Crawley stood her ground when one contestant threw major shade her way during the Oct. 27 episode of ‘The Bachelorette’!

Clare Crawley’s big showdown with Yosef Aborady on The Bachelorette — which has been teased in previews for weeks — finally went down during the Oct. 27 episode. Yosef was upset over Clare’s decision to have the guys play strip dodgeball on last week’s group date…which he wasn’t even on. He decided to bring it up to Clare at the cocktail party.

“It’s just completely unacceptable and completely classless,” Yosef said in a confessional. “It’s definitely showing me some traits of her character, as well as her maturity level. It’s not something that I, myself, would ever do.” The other guys tried to talk Yosef down from calling Clare out, but he wouldn’t have it. “I don’t care what these guys say,” he added. “I’m not going to back down from anyone, including the Bachelorette. I’m looking forward to telling Clare exactly how I feel and wash my hands of this atrocity.”

Yosef approached Clare with his concerns, which also included a “red flag” that he noticed on his own group date. He then brought up the dodgeball situation, and said really hurtful things to Clare. “I was absolutely appalled at the group date that occurred yesterday. It’s so humiliating and degrading and I don’t see how that translates into finding a husband,” Yosef said. “It seems very silly and immature. If I had been on that date, I sure as hell wouldn’t have crossed that line. Never in a million years would I be caught dead doing that.”

Clare listened intently and tried to explain that the fact that Yosef has a young daughter is the exact reason he wasn’t put on the dodgeball date. However, he wouldn’t let her get a word in edgewise. “I expected a lot more from the oldest Bachelorette that’s ever been,” he continued. “That’s not the type of example that I want to set for my daughter. You’re not setting the right example for my daughter. I’m ashamed to be associated with you. I can’t believe I sacrificed so much to be here just to watch that distasteful and classless display. And going back to our first date…I feel like you really overreacted and you sounded crazy.”

This was the point that Clare felt that she had to start getting a word in, and when Yosef tried to tell her not to “interrupt him,” she was NOT having it. “I’ve listened to you for the last 20 minutes!” she clapped back. “You know what — you are done! The way you’re talking to me right now….never in a million years would I ever think I would have to utter these words again. Do not ever talk to me like that. I never thought I would ever have to tell any man that I would never want them to be the father of my child. And I stand by that. I would never want my child having a father like you! Get out of here!”

This was a callback to what Clare said to Juan Pablo Galavis when he eliminated her at the final rose ceremony on his season of The Bachelor. However, while Juan Pablo just stood there dumbfounded, Yosef had more to say. “You’re not fit to be a mother to my child,” he shouted, as he walked away. “You’re completely classless. I expected way more from the oldst Bachelorette in history. Remember, you’re almost 40! She’s all yours boys!”

At that point, Yosef was officially eliminated and got in the car to drive away. Meanwhile, Clare was in tears. “Talking to a woman like that? I don’t care what I’ve done. I didn’t even do anything to that man!” she ranted. “Sick! Sick! I’m the oldest Bachelorette that’s 39 and standing here and single because I didn’t settle for MEN LIKE THAT!”

Luckily, Clare’s heartbreak was quickly cured when her number one man, Dale Moss, came to the rescue. He whispered words of encouragement to her, and she was beyond grateful that he was immediately by her side to comfort. Quickly, Yosef was a thing of the past, as Clare admitted, “I’m so falling in love with Dale.” WHOA!