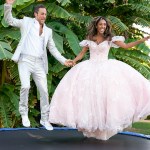 One of the contestants on his season of ‘The Bachelorette,’ Tyler Smith, has a brother in the country music industry, who some fans of the show may recognize!

Tyler Smith made it past the first rose ceremony and will continue on his journey to find love with Clare Crawley on this season of The Bachelorette. Unfortunately, with Clare and Dale Moss‘ relationship heating up and other drama unfolding at the resort, Tyler didn’t get much air time during the premiere. However, there’s been a lot of buzz surrounding him this season because of his famous brother. Here’s more to know about Tyler:

1. His brother is a country singer. Tyler’s brother is country singer Granger Smith. Granger’s first hit song was called “Backroad Song,” which performed well at country radio in 2015. He has since released tracks like “If the Boot Fits,” “Happens Like That” and “You’re In It.” Granger actually performed on Becca Kufrin’s season of The Bachelorette back in 2018, as well.

2. He put love on the back burner for his career. Tyler has spent years helping to manage Granger’s career, which means he’s spent a lot of time on the road. Unfortunately, that hasn’t left him much free time to find love! Now, he’s ready to put himself first and find the woman of his dreams.

3. His nephew died in a tragic accident in 2019. Although Tyler doesn’t have a family of his own yet, he’s an uncle thanks to Granger and Granger’s wife, Amber Smith. Granger and Amber had three kids, but sadly, their youngest boy, River, died in a drowning accident at the pair’s home in 2019.

5. He loves the outdoors. Tyler is a classic country boy, who enjoys planting trees and fishing in his spare time. He’s also passionate about protecting wildlife, according to his ABC bio.