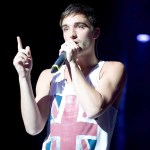 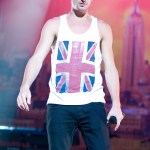 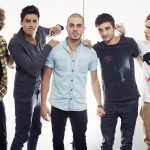 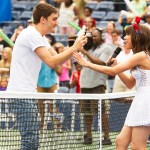 Tom Parker has great news! Months after The Wanted singer revealed he was diagnosed with an inoperable brain tumor, Tom shared that his treatment is working to ‘shrink this bastard!’

“SIGNIFICANT REDUCTION!” wrote Tom Parker on Jan. 7. The 32-year-old singer and member of The Wanted updated his fans about his inoperable brain tumor, and the prognosis was good. “These are the words I received today, and I can’t stop saying them over and over again. I had an MRI scan on Tuesday, and my results today were a significant reduction to the tumor, and I am responding well to treatment. Every day I’m keeping on the fight to shrink this bastard!”

“I can’t thank our wonderful NHS enough. You’re all having a tough time out there, but we appreciate the work you are all doing on the front line,” added Tom. “To my amazing wife [Kelsey Hardwick] who has literally been my rock. My babies- I fight for you every second of every day. Friends, family, and everyone on this journey with me- you have got me through my darkest day. To everyone on here- your love, light, and positivity have inspired me. Every message has not been unnoticed. They have given me so much strength. This journey is a rollercoaster, that’s for sure. Today is a f-cking good day.”

Tom first shared that he was diagnosed with a grade IV glioblastoma in October 2020. “We decided, after a lot of thought, that rather than hiding away and trying to keep it a secret, we would do one interview where we could lay out all the details and let everyone know the facts in our own way. We are all absolutely devastated, but we are gonna fight this all the way,” he wrote in that initial announcement. As Tom continues with his treatment, here’s what you need to know about him:

1. Tom has Stage IV Glioblastoma. In an interview with Britain’s OK! magazine, Tom revealed that doctors told him that his tumor was the “worst case scenario.” He received his diagnosis after suffering two seizures throughout the summer. “They’ve said it’s terminal,” Tom admitted. “It was a lot to deal with by myself. I still haven’t processed it.”

3. He auditioned on The X-Factor. Tom starting playing guitar when he was 16 years old. He wound up auditioning for The X-Factor but did not make it past the first round. He wound up dropping out of college to pursue his career as a singer.

4. He was with The Wanted for 5 years. The Wanted formed in 2009. The group included Tom, Max George, Siva Kaneswarm, Jay McGuinness, and Nathan Sykes. They released three albums before announcing that they’d be going on an indefinite hiatus in Jan. 2014 to pursue solo projects.

5. What has he done since the band split? In 2014, Tom showed off his skills as a DJ on a collaboration with Richard Rawson called “Fireflies.” He also competed on Celebrity Masterchef in 2015 and made it to the semifinals. He competed on The Jump, a reality competition series that requires contestants to partake in various winter sports, in 2016. Tom finished in third place on the show.