Kevin Costner, 67, is one of the biggest names in Hollywood. His roles in films and TV shows like The Bodyguard, Message in a Bottle, Dragonfly, Hidden Figures, and most recently, Yellowstone, have earned him widespread acclaim. His wife in the Western series, played by Gretchen Mol, dies before the show begins, though she does make occasional flashback appearances. Luckily, Kevin’s real-life wife is alive and well. He’s married to Christine Baumgartner, 48, who has been a major supporter of his acting career. Kevin is also a father-of-seven, and has been involved in multiple headline-grabbing relationships. Here’s everything you need to know about Kevin’s current wife and the women he dated before tying the knot.

Kevin and Christine had an on-again, off-again relationship for several years in the early 2000s. He was happily dating the model/handbag-designer until they broke up in 2002 amid reports they disagreed about having more kids. “She said, ‘I’m going to wait for you, but not long. When you come to your senses, come back to me,’” he told Parade years later. “And I did. Maybe it’s the ability to say you’re sorry.” They got back together and tied the knot on September 25, 2004 in a private ceremony at his expansive ranch in Aspen, Colorado. 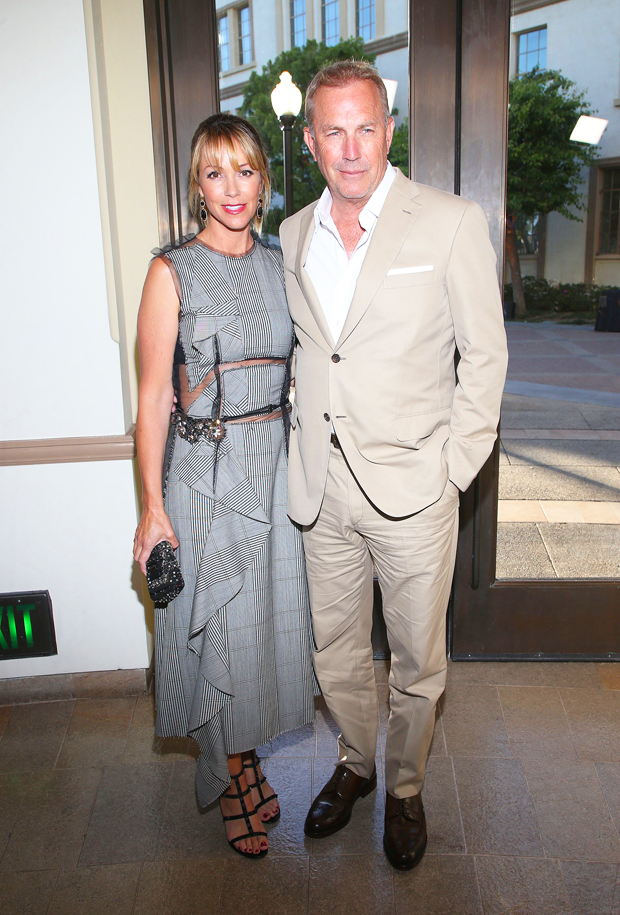 The couple went on to welcome three adorable kids, and Kevin has opened up about the challenges of having “two sets of children” who are 26 years apart. “As [my] children interact together, there’s always this little bit of, ‘Do you care for us now as much as you do them?’ That’s just a natural thing that happens, and you have to talk about how big love is,” he told Mom.com in 2015. “The ability to be able to love somebody else doesn’t mean there’s less love for you. Love seems to be always able to hang on to as many people as needs to be in that circle.”

He and Christine welcomed their first child, Cayden Costner, in May 2007. He’s appeared alongside his younger siblings, Hayes and Grace Costner, at various events with his parents. Little Hayes was born to in Feb. 2009, while Kevin’s youngest child Grace was born in June 2010.

Christine has been by Kevin’s side during his Yellowstone success. They walked the red carpet together at the 2022 SAG Awards, where Kevin and his co-stars were nominated for Outstanding Performance by an Ensemble in a Drama Series. The couple also attended 2022 Academy Awards and posed for photos on the carpet together. Kevin posted a photo of himself and Christine at the Oscars to Instagram. “How beautiful is my date? Thank you to @theacademy for having us tonight,” the actor wrote. 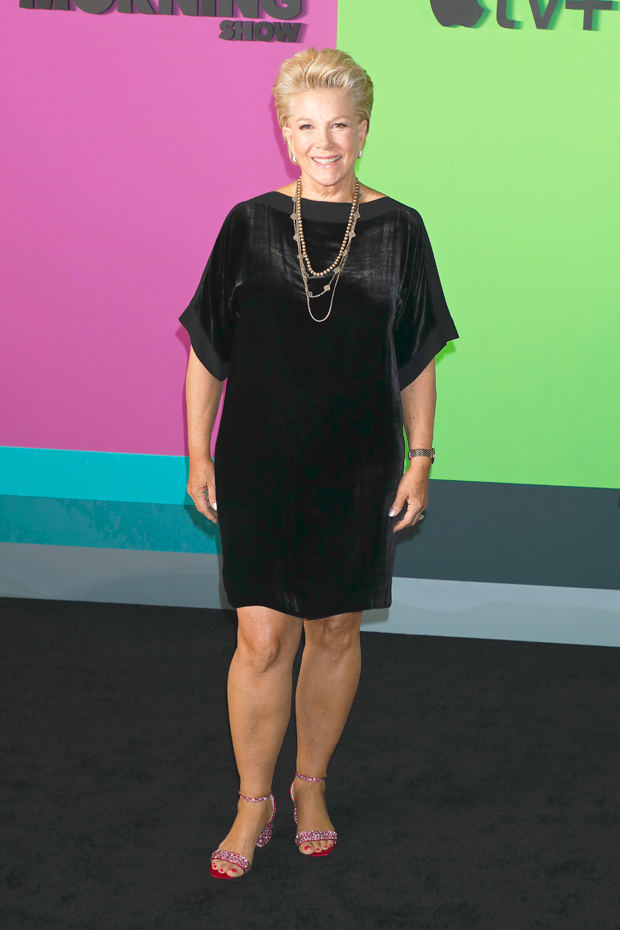 Former Good Morning America co-host Joan Lunden had a brief romance with Kevin the mid 90s. She opened up in a 1996 interview with TV Guide, citing the intense media scrutiny as the reason their relationship ended. “I think Kevin and I would have dated longer had it not been for the unbelievable press focus on us,” she said. “All the press made me very self-protective in subsequent dating.” Joan also opened up about their first date, telling the outlet, “He got this yacht and we sailed around New York Harbor and had dinner. It was quite romantic and quite beautiful. When he first walked on the boat and smiled at me as only he can smile and said, ‘Boy, I’ve waited so long to meet you,’ I almost fell over.”

Related: Harry Brant: 5 Things To Know About Stephanie Seymour’s Son, 24, Who Died Of A Drug Overdose 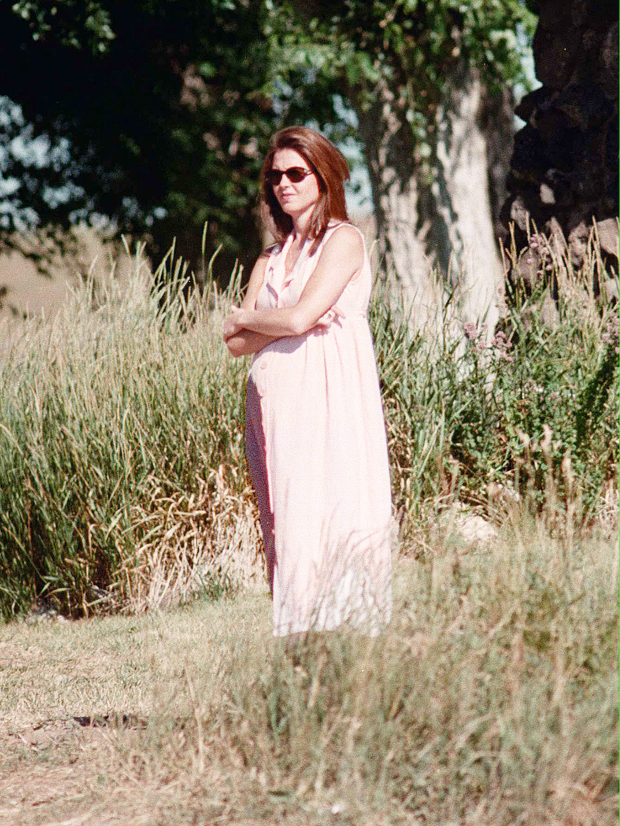 Kevin started dating Bridget Rooney after his divorce from first wife from Cindy in 1994. Just two years later, the new couple welcomed a baby boy named Liam, who was born in November 1996. He is arguably the most private of all his siblings and has stayed out of the spotlight and away from the Hollywood scene. Similarly, his mom has remained largely out of the spotlight despite her social status. She is the Pittsburgh Steelers heiress, and has remained involved in her family’s charitable endeavors. She went on to marry billionaire Bill Koch in 2005. 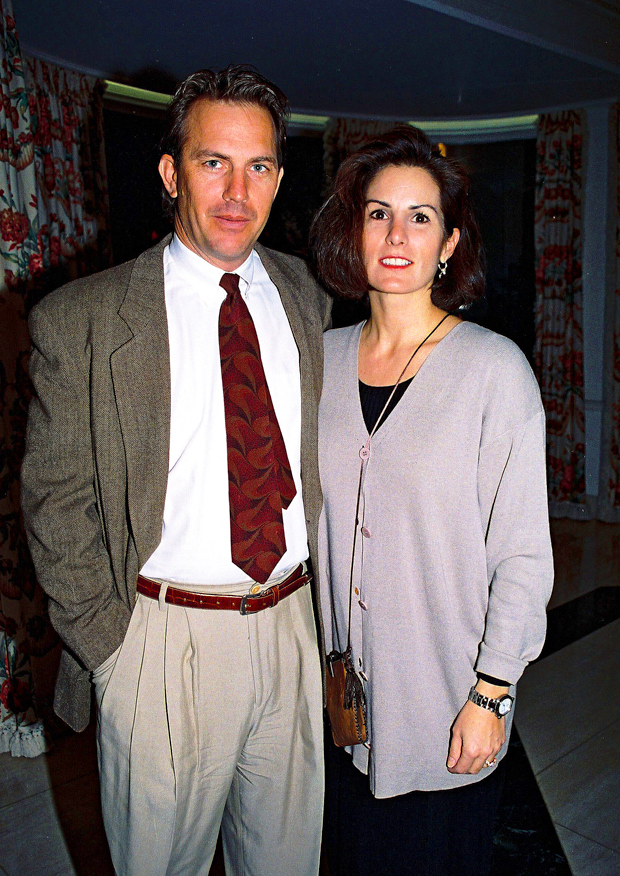 Kevin Costner met Cindy Silva in 1975 when they were both studying at California State University at Fullerton. His wife-to-be worked part-time at Disneyland, and he totally gushed about her in future interviews. “She was beautiful, she was sweet, she was smarter than me,” he said to People in 1989. “She represented everything about women that I like.” After three years of dating, they tied the knot in 1978, the same year he graduated with a bachelor’s degree in business administration. While Kevin was attempting to break into Hollywood, he also became a dad.

Annie Costner is Kevin’s oldest child. He welcomed her with Cindy in Apr. 1984. She went on to follow in her dad’s footsteps and pursued directing, producing, and acting having produced a variety of features, including El Cartel Cubano, ESPN 30 for 30: Bump, Spike and The Discarded: A Tale of Two Rios, She also acted in his acclaimed film Dances with Wolves, which Cindy also played a part in.

Despite their seemingly happy home life, Kevin and Cindy called it quits in 1994. “After 16 years together, we are ending our marriage,” Kevin and Cindy revealed in a statement at the time, People reported. “We have amicably resolved all issues regarding our children and financial affairs and a full marital settlement has been reached.” During their divorce proceedings, Kevin was accused of being unfaithful during their marriage, and Cindy is believed to have walked away with a settlement upwards of $50 million.