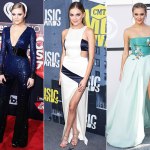 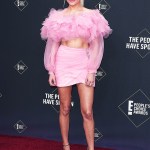 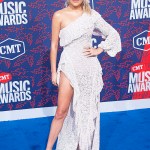 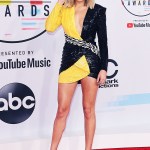 Happy birthday to country superstar, Kelsea Ballerini! She turns 27 on Sept. 12, and we’re celebrating by looking back at some of her best red carpet outfits.

Kelsea Ballerini is officially 27 years old after celebrating her birthday on Sept. 12. It’s been more than five years since Kelsea made her mark on the country music industry with her first album, and in that time, she’s emerged into a red carpet pro. In honor of Kelsea’s big day, we’re taking a trip down memory by looking back at some of our favorite looks that she’s worn to award shows like the ACM Awards, CMT Awards and more over the years.

In 2019, Kelsea hit up the People’s Choice Awards. She was pretty (and sexy) in her pink look. The bright-colored ensemble featured a high-waisted skirt, as well as a pink crop top. The top had sheer sleeves and a dramatic, ruffled design across the middle. Kelsea contrasted the pink look with super dark eye makeup and she pulled her hair back into a tight ponytail. The look was complete with strappy silver shoes, which accentuated the singer’s long legs.

That same night, Kelsea also took the stage to perform her song, “Club.” For the performance, she kept her pink theme going by wearing a strapless mini dress made of pink tulle fabric. She paraded around the stage with her dancers for an upbeat and fun performance — and, of course, she looked great while doing it!

Earlier that year, Kelsea also hit up the CMT Music Awards. This time, her look was all about the LEG! Kelsea wore a one-sleeved gown, which featured a thigh-high slit up one side. She posed like a pro on the red carpet, sticking out her right leg, Angelina-Jolie style!

Back in 2018, Kelsea went to the American Music Awards, and she looked beyond fierce while wearing a black and yellow mini dress. Not only was the dress very short and sexy, but it also had a plunging neckline that made it even hotter! Kelsea rocked the look confidently as she posed for photos on the red carpet. See that photo and more by scrolling through the gallery above!