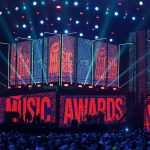 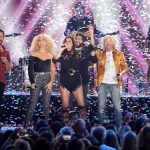 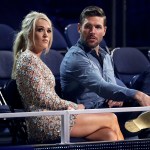 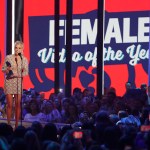 Kelsea Ballerini has done it again. The 25-year-old ‘Miss Me More’ singer looked especially glam as she hit the red carpet at the CMT Awards in Nashville.

Kelsea Ballerini, 25, looked amazing when she strutted the CMT Awards red carpet in Nashville on June 5. The “Miss Me More” singer wore a stunning one shoulder dress that had not one, but two slits. The singer showed off her legs, by rocking a super sexy hip high slit on one side of her dress and a slightly more modest one on the other.

Later on in the evening she changed outfits to take to the CMT Awards stage to perform her hit song, “Miss Me More.” Off came the white dress and instead Kelsea slipped into a pair of black short shorts, a sexy matching bustier and knee-high boots. Her hair scooped up into a high ponytail, she delivered an incredible performance.

It’s a big night for Kelsea who has been nominated for two CMT Awards – Video of the Year and Female Video of the Year for her hit song, “Miss Me More.” On the day that the nominations were announced, Kelsea shared her love and thanks with her fans on Twitter. “I love this video,” she said in a clip that she posted on Twitter. “I love what it says.”

Fans have been very vocal about Kelsea’s nominations as they’re the ones who vote to decide who walks away with the hardware. “Getting my votes in!! I’m so happy for you,” one person vowed. “Proud of you Kels,” another person tweeted. “And this video. It’s SO incredible and deserves all the awards.”

It’s been a busy year for Kelsea who is hitting the road this summer. The day after the CMT Awards she will be hitting the stage at the CMA Fest on June 6. She also has concert dates around the country and Canada through to September. That’s on top of writing songs for her upcoming album. On May 30 Kelsea shared a couple of Instagram pics of herself with singer-songwriter Tayla Park. She captioned the photos, “Having THE MOST fun writing for this album. Also @taylaparx you are an actual musical fairy.” Time will tell if these songs eventually get nominated for CMT Awards next year!