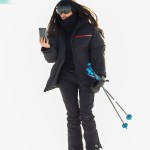 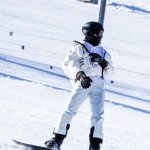 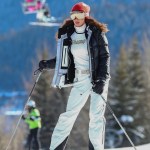 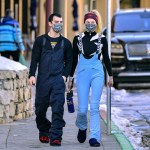 There’s nothing more magical than a snow day, so it’s no surprise our favorite Hollywood stars love taking their adorable kids out to play during the winter months.

When temperatures dip and snow begins to fall, many of our favorite A-listers take their adorable families away on winter vacations. The mini-me sons and daughters of Hollywood’s hottest celebs never fail to look adorable in designer puffer coats and snow suits while hitting the slopes, or simply playing in the snow with their parents. From Kylie Jenner and her sweet daughter Stormi Webster to supermodel Heidi Klum and her family, we’ve rounded up the best snaps of celebrity kids playing in the snow!

As if Stormi Webster get any cuter, the mini-me daughter of makeup mogul Kylie Jenner looked just as stylish as her mom when she posed for a sweet snap while on vacation in Lake Tahoe! The mom-of-one and her daughter opted for Christian Dior ski wear, with Kylie stunning in a black and white monogrammed jacket, a matching bucket hat and matching backpack. The Kylie Cosmetics boss also wore a white knit dress, sheer black stockings and black rubber boots with monogrammed detailing around the laces. Stormi stayed warm in a knee-length black puffer coat and the tiniest little snow boots! Her hair was styled in three adorable buns, placed at the front and back of her head. “my snow baby,” Kylie captioned the December 5 snap, which was taken on the 2020 KarJenner getaway to Utah.

Joseph & Kendra Duggar With Their Kids

A post shared by Joseph and Kendra Duggar (@littleduggarfamily)

Counting On stars Joseph Duggar and Kendra Duggar, who recently announced they’re expecting a baby girl, took their kids Garrett David and Addison Renee out for a fun snow day in December 2020. “Sunday pics in the snow,” they captioned a selfie, which showed the family outside during the snowfall. Little Garrett totally stole the show, looking so dapper in a pale blue suit jacket and a salmon tie. What an adorable little boy!

While on a break from the slopes, Reese Witherspoon shared a sweet video with her son Deacon Phillippe. The duo, clad in full ski gear, showed off a secret handshake while on a winter getaway in January 2020. “Never not dancing with @deaconphillippe! Giving #daftpunk vibes,” the Big Little Lies actress captioned the mother-and-son video.

Back in 2016, Heidi Klum shared a rare snap of her four children: daughter Helene ‘Leni’ Boshoven Samuel, son Henry Günther Ademola Dashtu Samuel, son Johan Riley Fyodor Taiwo Samuel, and daughter Lou Sulola Samuel. The America’s Got Talent judge captioned the photo “the best gift of all” as her four children were seen pulling sleds up a snowy hill! It’s clear they were all in the Christmas spirit, as they donned colorful outfits and Santa hats.