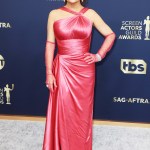 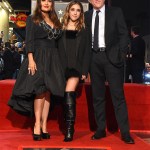 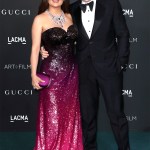 Bio:
Salma Hayek (born Salma Hayek Jimenez on September 2, 1966 in Coatzacoalcos, Veracruz, Mexico) is a Mexican-American film actress and producer. Salma was raised in a very wealthy, devout family. At age 12, she was sent to the Academy of the Sacred Heart in Louisiana, before enrolling the Universidad Iberoamericana. Salma’s true passion lied in acting, and at the age of 23, she landed the title role in the Mexican telenovela, Teresa. Salma moved to Los Angeles in 1991 to study acting. She started in The Alley of Miracles in 1994, and the Mexican film was a critical success. Salma followed it with memorable roles in Desperado, opposite Antonio Banderas, and From Dusk till Dawn. Salma showed her comedic talents in 1997’s Fools Rush In, and she continued to star in films like Wild Wild West, Dogma, and Traffic. In 2002, Salma played Frida Kahlo in the biopic, Frida, which gained her even more critical acclaim. Salma has appeared on the television shows 30 Rock and Ugly Betty, the latter of which she worked on as the Executive Producer. In 2015, she produced Kahil Gibran’s The Prophet, an animated feature about Lebanon’s famed poet.

Best Known For:
Salma Hayek is best known as an actress in movies like Desperado and Frida.

Personal Life:
Salma was engaged to French billionaire Francois-Henri Pinault in 2007. She gave birth to their daughter, Valentina Paloma, that year. In 2008, they ended their engagement, only to reconcile later. They were married on Valentine’s Day in 2009 and for a second time on April 25, 2009. Salma worked heavily in charity work, including raising awareness on violence against women and discrimination against immigrants. She is also a spokesperson for Avon and Revlon beauty products.

After more than three months in quarantine, Salma Hayek finally got her hair done to cover up her grey roots — and she showed off before and after pics of the makeover!

Salma Hayek lefts fan speechless when the gorgeous actress posted a breathtaking photo of her with no makeup on.

Salma Hayek started the weekend on a super upbeat note when she put her amazing dance moves on display in a fun new video!

Salma Hayek went make-up free in a brand new selfie, featuring the actress dozing, that she shared on Instagram! But the stunning star wasn’t alone — she was joined by a feathery friend who chose to stand watch on top of Salma’s head!

Salma Hayek took to Instagram to share a nearly flawless fresh-faced pic of herself posing with lighter long wet locks that helped to show off her natural beauty.

Actress Salma Hayek is thriving in quarantine! The ‘Grown Ups’ star shared a gorgeous selfie, which put her natural beauty front and center.

Salma Hayek once again left her fans in a state of shock when she posted an absolutely gorgeous photo of herself in bed!