Mordida! Mordida! Mordida! Salma Hayek is setting the record straight about that hilarious video she posted on September 3 of the 55th birthday celebrations that took place at her home alongside friend Angelina Jolie, 46. The ever-so-sultry actress appeared on Jimmy Kimmel Live on October 15 to promote her new Marvel movie Eternals and made some interesting behind-the-scenes revelations about her “surprise” party. 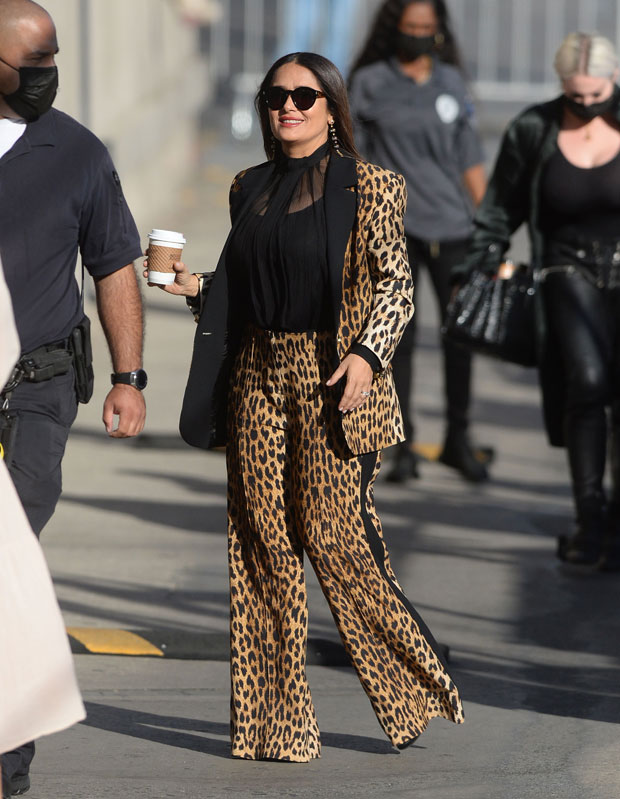 “Okay, there was no birthday party. All of those people were crashers,” Salma confessed to Jimmy, noting that she had no idea anyone would be showing up. The Once Upon a Time in Mexico actress said she strictly told her friends not to bother coming by but like caring friends — but they did anyway, not wanting her to be alone on her birthday while she was away from her husband and kids. “Everybody felt sorry for my loneliness so they just showed up at my house. You know? Before I knew it, 25 people. I mean, I had to say, bring some booze! Thank god there was a cake,” she added.

In Mexican culture, however, there’s one little twist when it comes to a birthday cake celebration! “After you blow the candles, you have to — mordida means ‘a bite’ — you have to bite the cake with your mouth without your hands holding or anything,” Salma explained. “And then there’s always one that comes and hits you and sticks your face inside the cake.”

As fans know, it was Angelina who had the big honor — which was all caught on camera during the party on Sept. 3. It turns out the Lara Croft actress had some reservations about the whole thing. “We told [Angelina] that I was going to bite and that the tradition was this and she says, ‘No, no. Oh no, I cannot do that,” Salma laughed, adding “she got over the nose.” That’s what good friends are for!

The Mexican beauty looked stunning as she approached the late night studio in an all leopard suit by Elie Saab. The cut channeled the ’70s with a drapey blazer and flared pants with a black bow blouse underneath. She accessorized with drop earrings and held onto a cup of coffee before heading inside the Hollywood-based building.