Salma Hayek gave her fans a rare glimpse at her 14-year-old stepson Augie James with an Instagram snapshot taken during a recent family vacation.

Salma Hayek‘s stepson Augustin “Augie” James is so grown up! The Eternals actress, 54, shared a rare photo of the 14-year-old, who is the son of her husband François-Henri Pinault, 59, and Linda Evangelista, 56, during a family vacation on Aug. 13. Salma and Augie were all smiles together while on what appeared to be a boat in the snapshot. “Here comes the weekend!! Viva el fin de semana!!! #tgif #weekendvibes,” she captioned the post.

Salma and Augie were joined on the boat ride by director Alfonso Cuarón, who could be seen sitting behind the pair in the photo. Salma sported stylish sunglasses for the outing, while Augie had on a gray T-shirt and Atlanta Braves baseball cap. The teenager couldn’t look more similar to his mom Linda, who shared some love to Salma and her son by dropping two heart emojis in the comments.

More of Salma’s fans commented on her post to express their disbelief at how much Augie looks like his mother. “They look so much alike,” one fan said, while another wrote, “Omg Augie so handsome.” British Vogue CEO Edward Enniful also chimed in, writing, “Salma and Augie !!!” with two heart emojis while also tagging Linda. 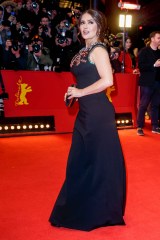 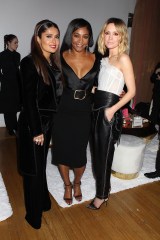 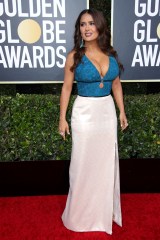 Augie was born in October 2006, but Linda refused to reveal the identity of his father at the time. The news later came out in 2011 when Linda filed paperwork seeking child support from François-Henri, who was in a relationship with the Canadian fashion model prior to Augie’s birth. That led to a contentious child support battle between the two, but several days into the trial, they reached an out-of-court settlement in May 2012.

Salma officially became a stepmom to Augie when she married François-Henri on Valentine’s Day 2009 in Paris. The Like A Boss actress and the French billionaire are also parents to 13-year-old daughter Valentina Paloma Pinault.