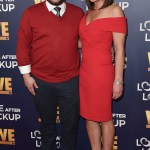 Bio:
Jon Gosselin (born Jonathan Keith Gosselin in Oshkosh, Wisconsin on April 1, 1977) is an American television personality. Jon and his ex-wife Kate Gosselin first received local media coverage when it was discovered they were having sextuplets after already being parents to twins. Discovery Heath offered the couple a reality series to chronicle their family life. Surviving Sextuplets and Twins aired in Sept. 2005. After two seasons, the show was switched over to TLC and renamed Jon & Kate Plus 8. The final episode of their show aired on November 23, 2009.

Best Known For:
Jon is best known for starring on Jon & Kate Plus 8.

Personal Life:
Jon met Kate at a company picnic on October 5, 1997 and they married on June 12, 1999. Their twin girls, Cara and Madelyn, were born on October 8, 2000. Kate later gave birth to sextuplets on May 10, 2004, their sons Aaden, Collin, and Joel, and daughters Leah, Alexis, and Hannah. The couple divorced in 2009. He’s since found love with his girlfriend Colleen Conrad.

Hannah Gosselin admitted she ‘misses’ her siblings and described the relationship she has with her dad Jon Gosselin, in a new interview.

All grown up! Hannah Gosselin was joined by her dad, Jon Gosselin, and some friends while celebrating her 18th birthday in Miami earlier this week.

Jon Gosselin also helped his daughter Hannah, who is one of only two sextuplets that has a relationship with their father, celebrate turning 18 down in Miami.

Jon Gosselin’s leg swelled up to twice its usual size after the painful bite, which happened while he was sleeping. The reality star quickly sought medical attention.

Jon Gosselin is celebrating being single for the first time in years and he EXCLUSIVELY explained to HL why it’s time to put himself first.

Jon and Hannah Gosselin have been enjoying some daddy-daughter time in LA ahead of the holidays, and he opened up about why he’s still hopeful about reconciling with his other kids, thanks to her.

Jon Gosselin returned to the Pennsylvania home that made him a household name and he revealed EXCLUSIVELY to HL how it made him feel!