If you purchase an independently reviewed product or service through a link on our website, we may receive an affiliate commission. For our affiliate policy, click here.

There’s a lot more to that bridesmaid dress story you’ve heard about. According to Prince Harry in his new memoir Spare, per an excerpt obtained by The Daily Mail, Meghan Markle had it out with Kate Middleton via text message — and the whole thing left the future Duchess of Sussex in a pool of tears in May of 2018.  According to the Prince, Kate texted Meghan four days before the big event to complain that Princess Charlotte’s bridesmaid dress didn’t fit. “Charlotte’s dress is too big, too long, too baggy,” she allegedly wrote. “She cried when she tried it on a home.”

Meghan, overwhelmed by drama with her estranged father Thomas Markle, simply put the text away for a day before replying. Since they were “French couture,” according to Prince Harry, it “wasn’t a big shock” that they weren’t perfectly fitted, and Meghan had a tailor in place to handle any problems.

“Meg didn’t reply to Kate straight away,” he wrote in the memoir. “Yes, she had endless wedding-related texts, but mostly she was dealing with the chaos surrounding her father. So the next morning she texted Kate that our tailor was standing by.” Meghan reportedly finally responded, “I told you the tailor has been standing by since 8am. Here. At KP (Kensington Palace). Can you take Charlotte to have it altered, as the other mums are doing?”

According to Harry, the Princess of Wales was displeased with the response, stating that the dresses “needed to be remade.” “Meg asked if Kate was aware of what was going on right now,” Harry continued. “With her father. Kate said she was well aware, but the dresses. And the wedding is in four days!” The Prince added that Princess Kate had “problems with the way Meg was planning her wedding” and that “it went back and forth.” Finally, he wrote, Kate replied shortly, “Fine,” agreeing to resolve the issue by visiting Meghan’s tailor. And that, according to Prince Harry, left Meghan “sobbing on the floor.” 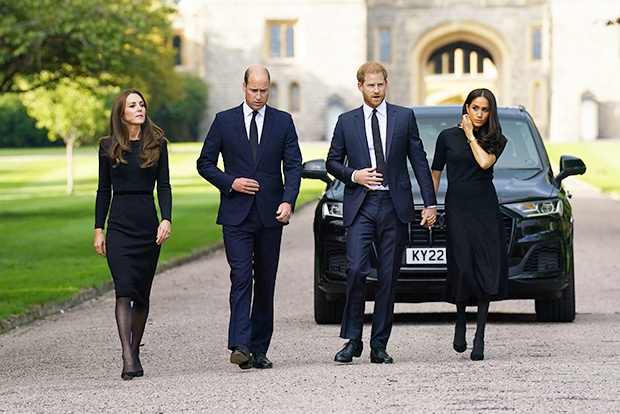 The excerpt seems to confirm what royal watchers have suspected for years — that Meghan and Kate haven’t always gotten along in their roles among the Royal Family. Other bombshell revelations in Harry’s memoir, which comes on the heels of a revealing Netflix documentary, include thoughts on his “dangerous” stepmother Queen Consort Camilla and this his brother Prince William, 40, once knocked him to the floor during a physical fight.

Related: Cressida Bonas: 5 Things About Prince Harry’s Ex Who He Cried To About Princess Diana’s Death

Prince Harry Through The Years: Photos As Young Royal To Today, His 38th Birthday