“Man, f-ck that old ass tweet,” Amber Rose posted to her Instagram Story on Sunday (Jan. 16), shortly after fans unearthed one of her tweets from 2015. In the old message, sent during Amber’s feud with her ex, Kanye West, the model and TV personality wrote, “@kanyewest I’ll leave that up to the Kartrashians to humiliate u when they’re done with u.” Amid Kanye’s ongoing drama with his soon-to-be ex-wife Kim Kardashian, fans dug up that tweet, but Amber, 38, shut down that talk. “I never got an apology for his ’30 showers’ comment, but f-ck it.”

“I started my Slutwalk and helped millions of women around the world stand up for themselves against slut shaming, so something amazing came out of it,” continued Amber. “Kim nor her sisters deserved that tweet, and y’all shouldn’t co-sign that either. Sh-t was old and immature AF of me to involve the KarDASHians in the mess [Kanye] made. Moving forward…learn from my mistakes. We all have kids, and family’s (sic) life is hard enough right now for a lot of [people]. I just wanna spread love and positivity.” 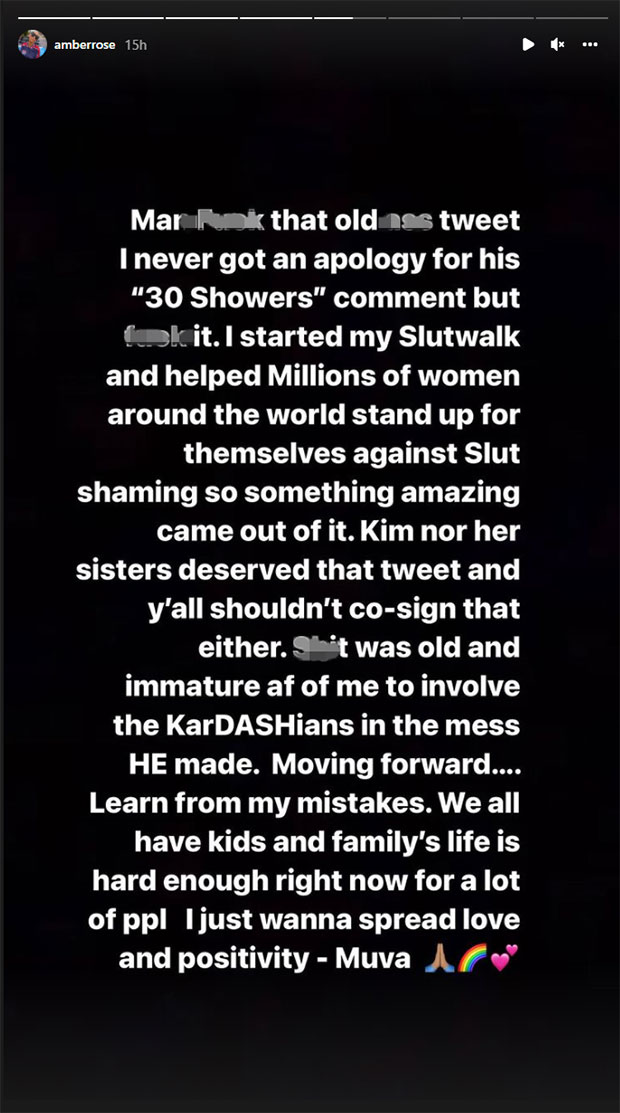 The “30 Showers” comment that Amber referenced came from Kanye’s now-infamous interview with The Breakfast Club. Ye, 44, was beefing with Amber after the model called out Kim’s sex tape (“When ur sister-in-law calls out ur ex for being a stripper, but ur wife has a sex tape”) online. “She’s just soaking up the moment,” said Ye, per Entertainment Tonight. “If Kim had dated me when I first wanted to be with her, there wouldn’t be an Amber Rose, you know what I’m saying? By the way, it’s very hard for a woman to want to be with someone that’s with Amber Rose. So she wasn’t sending nothing, you know what I’m saying? I had to take 30 showers before I got with Kim.”

Amber responded shortly after Kanye’s interview, making a lewd comment about Kim’s ex Ray J, before saying that “[people] make mistakes in life. Trust me, I have. But when you bully other people, and you’re not perfect, it’s so f-cked up. I own up to every piece of my life.”

Ye continues to deal with the drama over his breakup with Kim Kardashian and her new romance with Pete Davidson. In late 2021, Amber Rose accused her ex, Alexander “AE” Edward, of cheating on her with 12 different women. AE – who shares a son, Slash, with Amber — publicly admitted that he “got caught” and that while he loves his ex, he also “like(s) women” more.