Amber Rose has accused her music executive partner Alexander ‘AE’ Edwards of cheating on her with 12 people in a series of lengthy messages.

Amber Rose has accused partner Alexander “AE” Edwards of cheating on her in a series of messages on Instagram Story. While the model, 37, does not explicitly name her music executive partner and father of her son Slash Electric, 1, the messages she shared on Wednesday, Aug. 18 appear to point to Alexander, as Amber wrote, “I can’t be the only one fighting for my family anymore.”

In the first IG Story, Amber accused Alexander of cheating on her with 12 people. “I’m tired of getting cheated on and being embarrassed behind the scenes. All 12 of y’all bums (the ones that I know of there’s probably more) can have him. Y’all very much knew he was in a relationship with a baby and y’all decided to fuck him anyway. I saw all the texts and DM’s. Y’all were well aware but y’all don’t owe me any loyalty so it’s whatever.”

The model added that she has been “loyal and transparent” but has not received the “same energy in return.” Amber continued, “I’ll never say the girls names because I’m not in the business of ruining lives but y’all know who y’all are. As for him… the lack of loyalty and the disrespect is ridiculous and I’m done.” In a follow-up Story, Amber slammed her “raging narcissistic mom” before reflecting on being “mentally and emotionally abused” in her third and final Story on the matter. 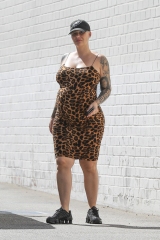 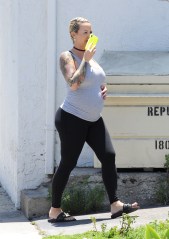 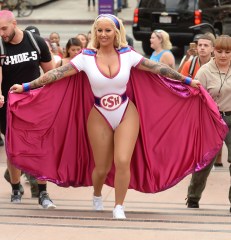 “I’m tired of being mentally and emotionally abused by people that I love,” Amber wrote. “I’ve been suffering in silence for a long time and I can’t take it anymore. That’s why I’ve been so quiet. I’ve been a shell of who I used to be but I refuse to let anyone damage me anymore. Family or not.” Shortly after the allegations, Alexander admitted to having the affairs on an Instagram Live with DJ Big Von. When asked what he thought about Amber’s messages, Alexander said, “I thought, ‘Shit, I got caught.'”

He added that he loves Amber, calling her his “best friend,” before adding, “I like women.” Alexander said, “At the end I don’t think anybody can be happy or successful if you’re not truly yourself, whether other people understand it or blame you. It’s just who I am, and it’s not how she wants to be loved.” While he “could stop” cheating, he said he did not want to “deprive” himself of his “true nature.” Alexander said, “I don’t want to live like that.”

Amber and Alexander began dating in 2018. They welcomed their son Slash Electric the following year in October 2019. The model is also mom to son Sebastian Taylor, 8, whom she shares with ex-husband Wiz Khalifa. The duo were previously married between 2013 and 2016. Amid her accusations of infidelity, Amber’s Instagram account has been wiped clean with the exception of one post from last year. It’s unclear if the model deleted the posts on Wednesday or days before.