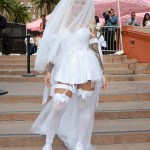 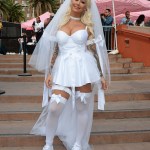 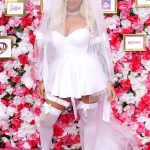 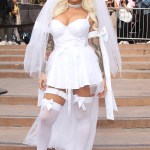 Amber Rose looked gorgeous in a mini wedding dress and sexy stockings when she took to the Los Angeles streets on Oct. 6 to stand up for women at her annual SlutWalk.

Amber Rose, 34, turned heads in a sexy white mini wedding dress and matching stockings with bows on top as she stepped outside in Los Angeles on Oct. 6 for her annual SlutWalk event! The model also topped off her look with an appropriate veil over long blonde curly locks and was all smiles as she posed for multiple photos, including one of her holding a sign that read, “WIFE A SLUT, WE’RE MORE FUN.” Amber started her SlutWalk as a way to raise awareness for the changes in attitude people are having with each other and she wants the walk to be about equality, not just for women, but for everyone, including men.

“A lot of men are learning exactly what consent is,” she told Harper’s Bazaar in Sept. “My SlutWalk is really inclusive, so we don’t leave anyone out. The LGBTQ community, non-binary, transgender, women, men, all walks of life, it doesn’t matter where you come from. We’re just spreading awareness and I think that whether being sexually assaulted or slut shamed, women in general, we’re just not taking it anymore.” She also opened up about why she thinks events like hers are representing a real change with women and women’s rights. “We’re not taking any sh*t anymore,” she explained. “We’re speaking up and we’re not scared just because these men are in higher positions or they have more money or they intimidate us. We have a voice and we all realize now that’s why SlutWalk is so important—to bring an awareness of actually what’s happening in this world. It’s the equality issues that we deal with, but also the fact that, we can band together as women and stand up for each other and realize that we do have a voice that can make a change.”

Amber was first inspired to launch her own SlutWalk after she learned about Toronto’s original SlutWalk back in 2011, and she admitted that it’s helped her to stand up for herself after a time when she didn’t think she could do so due to being a victim of sexual assault. “I didn’t know how to articulate what was going on and why I was feeling this way,” she admitted. “It was because I was sexually assaulted, I had been raped, and I was slut-shamed. I was victim-blamed, as well. I didn’t really have words to those things that were happening to me until I started looking online and seeing things and realizing I wasn’t alone, and that I now have a platform where I can help other women who are recovering and healing.”

Amber’s 2017 SlutWalk brought out an impressive 20,000 attendees and the movement has raised more than $700K. This year’s is expected to be just as (if not more) successful. It’s great to see Amber out there using her platform to make a real difference!