Cardi B is not a member of Hollywood’s No Regular Bathing Club. The rapper shaded celebrities who admitted to not showering daily with a hilarious message.

Cardi B is the latest figure to wade into the celebrity shower discourse — and the rapper is very confused about the latest bathing admissions making the rounds in Hollywood. After stars like Mila Kunis, Ashton Kutcher, and Jake Gyllenhaal let it be known that they are not proponents of showering daily, Cardi, 28, tweeted a hilarious response on Tuesday, Aug. 10.

“Wassup with people saying they don’t shower ?” Cardi tweeted. “It’s giving itchy.” It’s safe to assume that the rapper bathes her daughter Kulture, 3, whom she shares with husband Offset, regularly — and that this ritual will extend to baby no. 2.

The bathing discourse began with Mila and Ashton, who revealed that they don’t bathe their children Wyatt, 6, and Dimitri, 4, regularly while on Dax Shepard and Monica Padman’s Armchair Expert podcast last month. Ashton also revealed that he does not use soap on his body regularly.

“I didn’t have hot water growing up as a child, so I didn’t shower much anyway,” Mila said. “But when I had children, I also didn’t wash them every day. I wasn’t that parent that bathed my newborns — ever.” Ashton chimed in and added, “Now, here’s the thing: if you can see the dirt on them, clean them. Otherwise, there’s no point.”

Cardi B: See Photos Of Her Hottest Red Carpet Looks 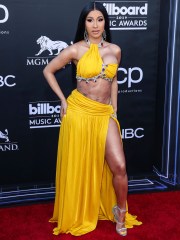 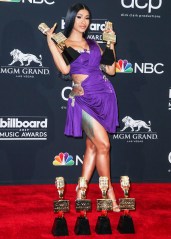 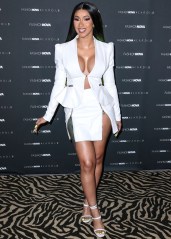 He continued, “I wash my armpits and my crotch daily, and nothing else ever. I got a bar of Lever 2000 that delivers every time. Nothing else.” Following the controversy, Dax and his wife Kristen Bell defended Mila and Ashton’s stance while on The View in early August.  “I’m a big fan of waiting for the stink. Once you catch a whiff, that’s biology’s way of letting you know you need to clean it up,” Kristen said. “So I don’t hate what they’re doing. I wait for the stink.”

Just a few days after Dax and Kristen’s interview, Jake revealed that he is also a member of Hollywood’s No Regular Showers Club. In his interview with Vanity Fair published on August 5, the actor said: “More and more I find bathing to be less necessary, at times. I do believe, because Elvis Costello is wonderful, that good manners and bad breath get you nowhere. So I do that. But I do also think that there’s a whole world of not bathing that is also really helpful for skin maintenance, and we naturally clean ourselves.”

Cardi is not the only celebrity who has advocated for daily showers. Both Jason Momoa and Dwayne Johnson have joined in on the discourse and confirmed that they do, in fact, bathe regularly. “I’m not starting any trends. I shower, trust me,” Jason told Access Hollywood on August 9. “I’m Aquaman. I’m in the f*cking water.” Dwayne tweeted that he is the “opposite of a ‘not washing themselves’ celeb” just a few days prior. “Face wash, body wash, exfoliate and I sing (off key) in the shower,” he wrote.