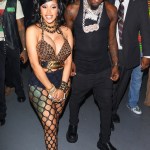 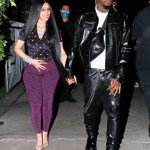 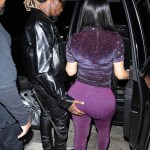 Cardi B, Offset and Kulture are about to become a family of 4! The ‘WAP’ rapper confirmed she’s expecting her second child via Instagram shortly after her BET performance.

Congratulations are in order for Cardi B! The 28-year-old rapper shocked fans as she revealed her second pregnancy with husband Offset, 29, during the BET Awards on Sunday, June 27. Cardi’s growing baby bump was clearly visible as she slayed her performance of “Type Sh*t” in a mesh catsuit that was completely covered in crystals (except over her tummy). Minutes after she took the stage, the New York native posted a photo from a pregnancy shoot to her Instagram account. “#2! @offsetyrn,” she simply wrote, along with a heart — see the photo here.

The “WAP” rapper was completely nude in the artsy Instagram photo, with her breasts and bump covered by white paint or paper maché material. Her iconic floral tattoo was on full display as her side profile faced the camera, showing off her sizable bump. Cardi closed her eyes and cupped her tummy as her long, black hair cascade down her back in the stunning photo. She simplyt accessorized with a large pair of gold earrings.

Cardi and Offset, who secretly tied the knot in September of 2017, welcomed their first child together, Kulture Kiari Cephus (whose name as inspired by her dad and his rap group, Migos) on July 10, 2018. Cardi went about announcing her first pregnancy in a much different way than her second. The first time around, Cardi was the subject of mass pregnancy rumors — though, there was no concrete proof. In April of 2018, the rapper debuted her baby bump during a performance on Saturday Night Live , which marked the first time she addressed and confirmed rumors and eventual reports that she was pregnant.

The rappers’ celebrated their daughter’s second birthday last summer with a lavish pink-themed bash at a mansion in CA. The big bash included massive balloon arches, arts and crafts, a ball pit, Kulture-themed cocktails (for the 21+ guests), a multi-tier cake and much more. At the time, Cardi took to Instagram to share photos with her mini-me in matching outfits, which included blue patterned jackets and skirts.

The Grammy-winner went on to admit that her daughter’s birthday was an emotional event. “She don’t know how f—ed up in emotions and tears I am today,” Cardi wrote on Instagram at the time, adding in disbelief, “My baby deada** turning 2 today.”

Despite telling Jimmy Kimmel, during an October 2018 appearance on his late night show, that her first childbirth experience with Kulture “broke my vagina,” Cardi’s clearly ready for round two! “Why nobody tell you about that? Nobody told me they were going to stitch my vagina,” the “WAP” rapper said, recalling, “People were like, when you give birth…it’s gonna hurt. But they’re never like…YOUR VAGINA!”

Congratulations to the rap couple on the exciting news!