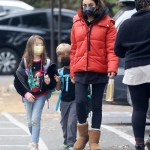 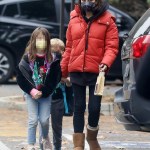 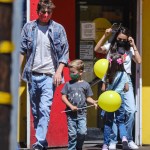 Devoted couple Ashton Kutcher and Mila Kunis were spotted getting some fresh air and bonding with their sweet, six-year-old daughter, Wyatt, during a hike through a picturesque Los Angeles park!

Mila Kunis and Ashton Kutcher are staying safe and healthy — and getting their kids in on the practice too! The That ’70s Show alums were spotted on October 7 in a Los Angeles park enjoying some much needed fresh air with their adorable kiddos, daughter Wyatt, 6, and son Dimitri, 3. Mila, 37, completely set the example for the sweet little family, sporting a face mask and rocking a pair of shorts, sneakers, and a “Happy Tee” T-shirt!

Ashton, 42, followed suit, sporting a white hoodie with rainbow design, shorts, sneakers, and a face mask along with his baseball cap. The family-of-four appeared to be joined by friends, but Ashton and Mila definitely made the most of their downtime with their youngsters. Both Wyatt and Dimitri appeared to wearing tie-dye T-shirts, with little Wyatt sporting pink sneakers, a skirt, and an adorable bow in her hair!

It’s so fun to see the beloved couple out and about with their growing youngsters after some major changes in their life. In May, the A-list parents put their $14 million Beverly Hills mansion on the market and began the hunt for a new abode where they could continue to raise their little ones. But since their busy early summer move, the couple has gone on plenty of fun outings with their kiddos. And a number of them have involved delicious treats!

Just two months after selling their Beverly Hills home, Ashton and Mila were spotted out at Menchie’s in Los Angeles. The popular frozen yogurt store served as the perfect backdrop for the family’s summer outing. And, just like they did during their recent hike in an LA park, Ashton and Mila continued to set an example for their children by wearing face masks and staying socially distant from other patrons outside.

As summer came to an end, Mila and Ashton, who wed in 2015 after Wyatt’s birth, treated themselves and their youngsters to some delicious ice cream shakes! It seems that family outings are a staple for the Kutcher-Kunis household. And though the couple is very reticent to discuss their family or show their children’s faces on social media, fans love seeing snapshots of their time together in these precious, candid moments!