Charlize Theron certainly knows how the celebrate! The newly-minted 46-year-old is on a birthday tour in Greece, and was most recently spotted rocking a gorgeous swimsuit while paddle boarding. Charlize was on the Greek island of Paros with her two daughters Jackson, 9, and August, 5, along with her mom Gerda Jacoba Aletta Maritz when she was photographed wearing the black one-piece. She seemed to be in high-spirits for the August 8 outing, which also included a family boat trip. 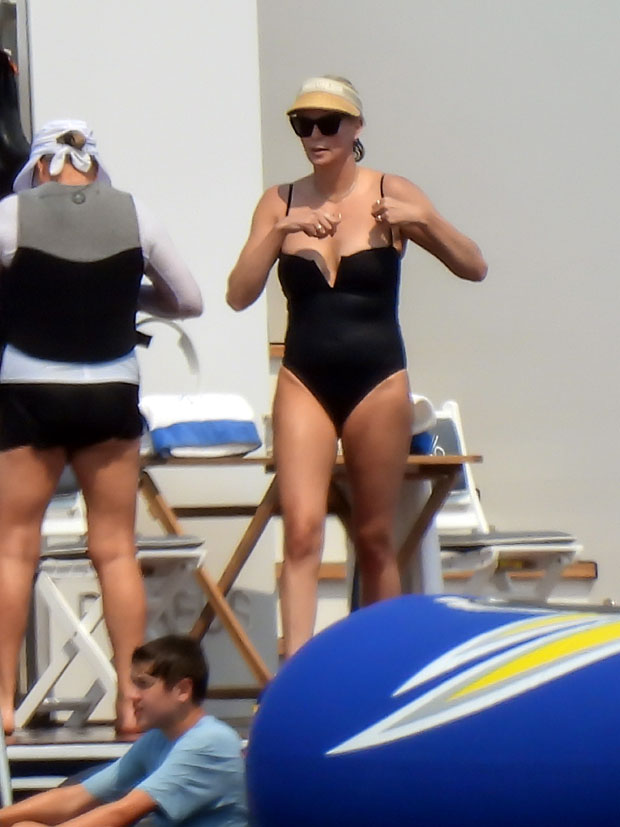 The F9 star paired her swimsuit with a dark pair of shades, and slicked her platinum blonde tresses back behind a beige visor. Although the mom-of-two is generally quite private when it comes to her kids, she shared a clip of the trio jumping off a yacht earlier in the week! As fans would know, these latest snaps come just one day after Charlize gathered her pals for a prom-themed party in celebration of her big day.

The bash, which took place on a luxury yacht, was more specifically an ’80s ‘prom murder mystery’ party, and Charlize appeared to be having a great time. “Well I never got to go to prom, but this year for my bday my friends decided to change that,” she captioned an Instagram snap on August 6. “I love these humans more than words can describe. Only they could know that an 80s prom murder mystery party on a boat is my literal dream birthday. What a family, what a night.” Charlize opted for a casual pink tee which read ‘Birthday Girl’, along with cut-off denim shorts.

The Bombshell star has kept her private life largely out of the spotlight. However, she did open up about the adoption process to fashion designer Diane von Furstenberg in a 2020 interview. “That whole process was incredibly empowering for me as a woman,” said Charlize, of adopting her two daughters. “There is a great power in choosing to be a mother and then doing it when your body, your mind and everything is celebrating all of that.” She also spoke to MailOnline in 2019 about motherhood. “I have two beautiful daughters who, just like any parent, I want to protect and I want to see thrive,” she explained.

“They were born who they are and exactly where in the world both of them get to find themselves as they grow up, and who they want to be, is not for me to decide. My job as a parent is to celebrate them and to love them and to make sure that they have everything they need in order to be what they want to be. And I will do everything in my power for my kids to have that right and to be protected within that.”