Madonna, 62, and daughter Lourdes Leon, 24, are looking more and more alike! The mother-daughter duo snuggled up for a sweet selfie posted to Madonna’s Instagram page on Saturday, June 5. “Mambo with Mariposa,” the Music singer captioned the snap, adding “#lola” along with butterfly and blue heart emojis. The music icon kept her eyes hidden behind a pair of futuristic sunglasses as she looked into the camera, revealing her lined and plumped up lips.

Madonna rocked a dusty rose lipstick with a slight sheen, which Lourdes also appeared to be wearing. The 24-year-old appeared to be totally make-up free sans her lip color, opting to keep her raven colored hair pulled back. A hint of a green tank top popped out towards the bottom of the image, while Madonna seemed to be wearing a butterfly scarf.

In recent years, Lourdes has been stepping into the spotlight, embracing daring and risque behavior just like her mama. She’s appeared as a runway model in several fashion week shows, continuing the interest with racy m as magazine editorials — including one from May that ran in Issue 14 of Office Magazine. Lola sported a cheeky dress made up of purple rectangles that opened up over her derrière as she squatted. 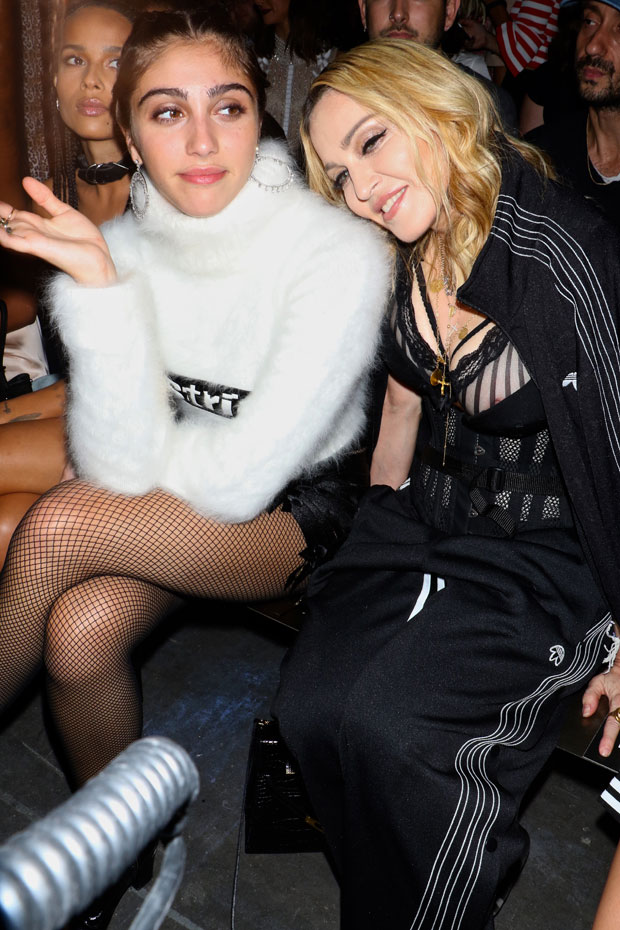 Madonna — who is also mom to Rocco Ritchie, 20, David Banda, 15, Mercy James, 15, and twins Stella Ciccone and Estere Ciccone, 8 — has gushed about being proud of “insanely talented” Lola in the past. “I’m green with envy because she’s incredible at everything she does – she’s an incredible dancer, she’s a great actress, she plays the piano beautifully, she’s way better than me in the talent department,” the Sex author said to Vogue back in 2019.

There is one thing that Madonna felt was holding Lourdes back, though. “But she doesn’t have the same drive,” Madge went on of her daughter with
Carlos Leon. “And again, I feel social media plagues her and makes her feel like, ‘People are going to give me things because I’m her daughter.’ I try to give her examples of other children of celebrities like Zoe Kravitz, for instance, who have to work through that ‘Oh yea, you’re the daughter of..’ – and then eventually you are taken seriously for what you do. You just have to keep going. But does she have the same drive that I have? No. But she also has a mother, and I didn’t. She grew up with money, and I didn’t. So everything is going to be different. But what can I do? I can’t fixate on it. I just have to do my best,” she added.