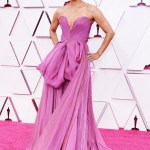 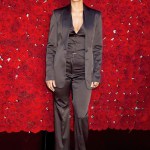 Halle Berry stunned her Instagram followers with another sultry, sassy photo! The Oscar winner sent hearts racing while posing in a bikini top.

Halle Berry left her fans drooling over a sizzling Instagram snapshot once again. The 54-year-old took to social media on April 8 and shared a smoldering photo as the X-Men actress wore nothing but a bikini top and matching pants. “When the pants so dope, you don’t need a top. thank you,” she captioned the post.

The stunning A-lister, who’s known for flooding her social media with eye-catching images, posed seductively in her lush backyard while surrounded by a picturesque landscape of tall trees and nature throughout. She wore a pair of LaQuan Smith‘s Chocolate Ninja joy Pant which is part of his Spring/Summer 2021 collection. Celebrities and fans alike swarmed Halle’s comments section to gush over the former James Bond girl.

Supermodel Heidi Klum dropped by to leave several fire emojis and a heart eyes. “Love them but everything looks amazing on you,” Maria Emmerich, celebrity keto chef and author said. “When the woman so dope she don’t need anything,” one fan commented on the photo. Another responded, “Classic beauty for life.”

Halle is the queen of content and she always knows how to keep her followers coming back for more. She took to Instagram just days before on April 5 and showed off her long legs while lounging in the bathtub. The toned star crossed her legs and leaned them against a window sill.

She wore a pair of Dolce & Gabbana metallic silver pointed toe heels which were adorned with a bow. Halle rested one hand over her head while relaxing in the oversized bathtub. “You up?” the mother-of-two wrote alongside the photo as she could be seen scrolling through her phone, while laying back in the stone tub.