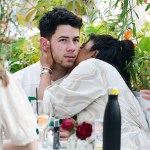 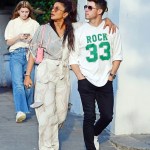 As Nick Jonas was counting down to the launch of his ‘Spaceman’ album, he got a random smooch from his love, Priyanka Chopra.

There were plenty of surprise cameos during the Nick Jonas Spaceman launch party. Ahead of the album touching down on Friday (March 12), Nick, 28, threw a bash that featured appearances from his three dogs – Gino, Panda, Diana – and his wife, Priyanka Chopra. Around half-way through the little pre-launch bash, Priyanka, 38, popped in (around 06:11 in the above video) to wave to all of Nick’s fans before giving her husband a kiss.

“SO as I mentioned, my wonderful wife set up this whole thing, little Spaceman launch party, even in times when we can’t do anything,” said Nick before Priyanka’s entrance, holding up one of the many Spaceman-themed decorations towards the camera. “Spaceman balloons, about twenty times the size of my head. The lovely NASA guy behind me. [Priyanka]’s over here, actually watching, right behind us.” Nick also shared that Priyanka was the “inspiration for the album, and obviously, the inspiration to everything in my life.”

Nick also shared the music video for Spaceman’s title track. The visual also features a cameo from Priyanka, as Nick portrays an astronaut trying to make his way home to his wife. “Mask off minute I get home / All safe now that I’m alone / Almost like a spaceman / I feel like a spaceman,” he sings while stranded on a dusty red planet. The video also gave some eye-candy for all his fans out there in the form of a shower scene, one that showed off all of Nick’s muscles.

It’s been two years since Nick and Priyanka tied the knot in a December 2018 ceremony in India. The couple continues to thrive, even under the pressure of the COVID-19 pandemic. One of the secrets to their success is a “pact” to see each other at least once every three weeks, no matter where they are in the world. This is one of the things that, an insider told HollywoodLife EXCLUSIVELY, has kept these two “head over heels in love” with each other.

Nick spoke to Zane Lowe on Apple Music shortly after “Spaceman,” the single, was released into the world at the tail-end of February. He also revealed how the recent Jonas Brothers reunion helped him grow as a creative voice. “I think that every lesson I’ve learned has led me to this album and this moment in time, and I hope that this season of my life teaches me my next lesson so I can take that onto the next project,” he said. “But I feel like I’m very fortunate to work with some great teachers and people that I’ve tried to be a sponge around. And that’s all you can do.”

“You just do your best to push yourself. And I think there’s some freedom in knowing too that the brothers and this thing can co-exist and they’ll help each other,” added Jonas. “And I’m excited to get with the brothers and find our big stadium song to go and play those shows again for our fans when it’s safe to do so. But it’s really nice to make something that just feels right to me and important to me and we’ll see how it’s received, but I’m really proud of it. And that’s all I can really ask for.”