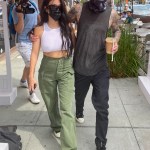 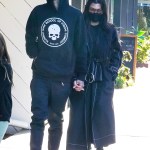 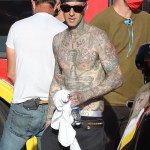 Kourtney Kardashian was honored by her boyfriend, Travis Barker, with a post on his Instagram Story for International Women’s Day.

He also honored his daughter, Alabama Barker, and former stepdaughter, Atiana De La Hoya, on his Story with posts for each of them, as well. Atiana is Travis’s ex, Shanna Moakler’s, daughter with her former fiancee, Oscar De La Hoya. Travis and Shanna were married in 2004, and were together on and off until they officially ended things in 2010. In addition to Alabama, Travis and Shanna also share a son, Landon Barker.

Travis’s show of appreciation for Kourtney comes amidst their hot new romance. The two had been friends for years before getting together romantically, and have not been shy about showing their love for one another now that they’re officially an item. Travis even gushed over Kourtney during an interview with Drew Barrymore at the beginning of March.

“Up until now, I would, you know, date girls that didn’t have kids, and I found it kind of hard,” Travis admitted. “I think they would have trouble understanding, ‘Well, why don’t you want to go to dinner every night with me?’ or ‘Why don’t you want to see me every night?’ Now I’m spending time with a woman who’s a great mom, a great friend. And you don’t have to worry about any of those things. It just comes natural. It’s, like, a maturity thing.”

As HollywoodLife EXCLUSIVELY reported, Travis was the first to “finally make a move” and turn his friendship with Kourtney into something romantic. “She’s had a thing for him, too, but wanted to respect everyone’s boundaries,” our source explained. “Kourtney and Travis hung out as friends for years, so it’s nothing new for the kids. They’re all fine with it.” Kourtney, of course, shares three kids with her ex, Scott Disick.