Think pink! Chrissy Teigen was all about the color pink — as well as plenty of personal life sharing — via her Instagram stories on Feb. 11. She started the day in a pastel pink fuzzy sweater while wearing her natural long brunette hair with blonde highlights in a loose bun atop her head. As she went about her day of organizing her book and plate collections, the 35-year-old decided to change up her look. During the afternoon, she donned a waist-length straight bubble-gum pink wig to match her sweater.

Chrissy made no mention of her new look, as she was too busy sharing with fans via her IG stories that she found a $10 DIY nachos kit with all of the key ingredients. She was seen piling extra cheese upon her snack while on a cooking tray when the long pink wig made it’s debut on her head with no explanation.

“What? Nachos!” Chrissy excitedly exclaimed in a frontal shot with the wig, while opening her oven to show her tasty treat cooking inside. In addition to the wig and pink sweater, the mother of two rocked a pair of Daisy Duke cutoff jean shorts that showed off her long model legs, and a pair of cream mid-calf suede boots. “Today is nacho day!” she playfully sang in the kitchen.

Next Chrissy appeared in another pink wig, but this time it was far shorter in the form of a long bob with a center part. She ended up adding some sticker face crystals above her eyes for some sparkle, as she stared into the camera admiring herself. At one point she loudly asked, “Is this too much? What is going on with today?”

The social media queen was taking comfort in sharing all of her day — no matter how minute — with her fans. At one point she rocked the wig and crystals proclaiming, “That’s a wrap. That’s a wrap on the three o’clock hour,” as her TV could be heard in the background. Chrissy’s four-year-old daughter Luna then came to visit her mom on the sofa and brought a “special guest”: a doll with pink hair to match Chrissy’s! 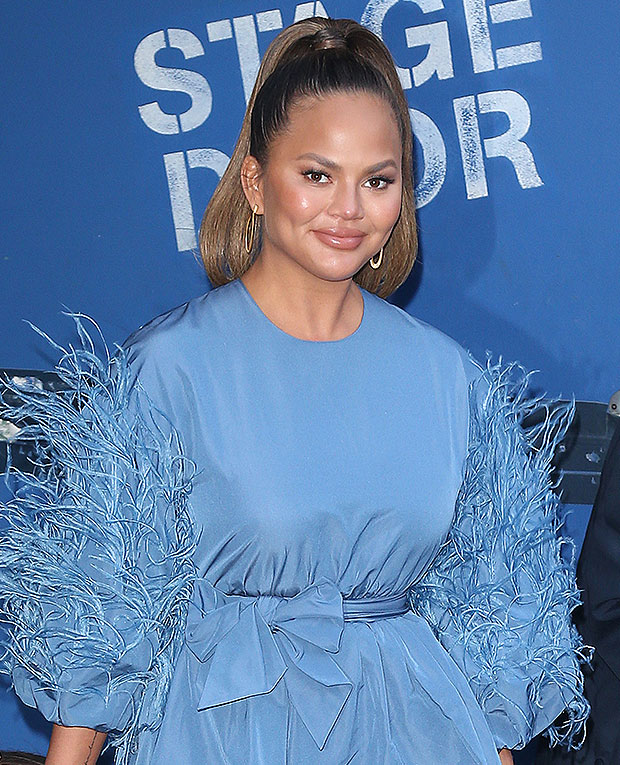 That seemed to be the end of Chrissy’s several hours of pink hair, as she moved on to helping husband John Legend, 42, and their two-year-old son Miles race cars down the side of a staircase into a large grey cooking pot filled with water. Chrissy ended her long day of IG stories videos late in the evening, showing John playing his grand piano and crooning a tune inside their living room as Chrissy filmed him from across the room on a sofa. All in all, it looked like a good day for the cookware goddess. And she’s been needing those lately.

Chrissy has been undergoing a roller coaster of emotions, as last week she revealed that her son Jack — who she lost in late Sept. 2020 while five months pregnant — would have been due. On Feb. 4 she shared a post featuring stills from her family’s summer 2020 vacation to Mexico, where John shot the music video for “Wild,” which unveiled Chrissy’s surprise pregnancy at the end.

“These are from our video shoot for Wild in Mexico. I was 10 weeks along and out of my mind happy. I knew the video would take a bit to get together so thought it would be cute to share our news with the world through the ol classic hand on belly trick at the end. I could have never imagined what would happen over the next 10 weeks…” she wrote in the caption of the post.

“Not sure I’ll ever be able to watch that video again without sobbing but I hope he feels my tears and knows we miss him so. He would have been here any day now – if he were like Luna and Miles, I’d probably be holding him as we speak. I am so full of regret that I didn’t look at his face when he was born. I was so scared of seeing him in my nightmares that I forgot about seeing him in my dreams. I hurt every day from that remorse,” Chrissy continued in the heartbreaking post.

“This month is a rough reminder and to be honest, I thought the worst was over but I guess life and emotions aren’t on any sort of schedule. Love you guys to pieces and am grateful for all your support and love. I firmly believe energy and healing travels through the night sky and I feel it, I promise I do. and I love you jack. I miss you so so much,” she concluded. Hopefully a day of playing with pink wigs, making nachos, sharing doll time with her daughter and watching her beloved husband race toy cars with their son was enough to bring Chrissy some joy.