Four months after sharing the heartbreaking news that she miscarried her third child, model Chrissy Teigen opened up on what would have been her unborn son’s birth week. “my little jack would have been born this week so I’m a bit off,” she tweeted on February 3. “I truly feel kicks in my belly, but it’s not phantom. I have surgery for endometriosis tomorrow…but the period feeling this month is exactly like baby kicks. sigh.” The cookbook author also shared a video of her midsection, in which it appeared something was moving in her stomach.

look at this 😩 I’ll pretend it’s him saying hi – it never stops. pic.twitter.com/5FKSE3g8cG

“look at this I’ll pretend it’s him saying hi – it never stops,” Chrissy captioned the heartrending tweet. Chrissy first revealed the sad news that she and husband John Legend had lost their third child in a Sept. 30 post. “We are shocked and in the kind of deep pain you only hear about, the kind of pain we’ve never felt before. We were never able to stop the bleeding and give our baby the fluids he needed, despite bags and bags of blood transfusions. It just wasn’t enough,” Chrissy began in the caption of an Instagram and Twitter photo showing her in tears, while in a prayer position in her hospital bed. 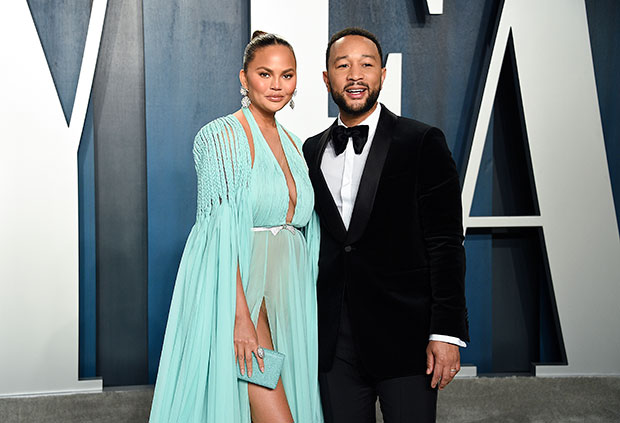 “We never decide on our babies’ names until the last possible moment after they’re born, just before we leave the hospital. But we, for some reason, had started to call this little guy in my belly Jack. So he will always be Jack to us. Jack worked so hard to be a part of our little family, and he will be, forever,” she continued. The former swimsuit model was around the halfway point in her third pregnancy when she was admitted to the hospital. Chrissy had endured continual bleeding from a weakened placenta following 10 days of doctor-ordered home bedrest.