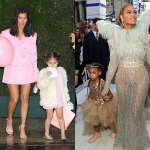 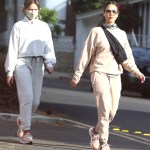 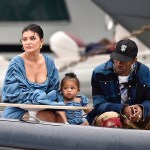 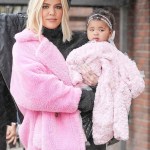 Chrissy Teigen and her adorable four-year-old daughter, Luna, were the cutest ‘twins’ on Instagram! Check out their adorable snap together and see more images of famous moms matching with their daughters!

It’s official: Luna Simone Stephens is mom Chrissy Teigen‘s mini-me! The stunning Cravings author, 34, proved just that when she posted the sweetest snap of her and Luna wearing matching pink and white outfits on July 24. In the pic, Chrissy and Luna, whom the former model shares with John Legend, 41, posed-up by pointing their toes, almost as if they were pink flamingos!

Chrissy absolutely beamed at her four-year-old, who couldn’t have looked cuter! While the mother-of-two’s ensemble looked more like a romper, Luna’s was an adorable littler dress bearing the exact same pink and white pattern as her mom’s outfit. “Twins,” Chrissy proudly captioned the image, which you can see above! It was some major cuteness overload.

But as devoted fans of Chrissy know, this isn’t the first time that she and Luna have twinned. In February, the mother-daughter duo posed-up for a promotional photo for Chrissy’s second QUAY X CHRISSY collection! The pair rocked matching one-piece swimsuits, sunglasses, cream-colored, tied-off tops and even bore the same facial expression! But their bond goes way beyond just dressing up together — although, it is one of the cutest parts of their relationship.

Not only are these two are absolutely adorable, they’re so close, too! Chrissy often documents her time with little Luna on Instagram, and it’s so evident how much the little girl adores her mom. In fact, after having her breast implants removed, Chrissy shared the adorable message that Luna wrote to her mom. “Have fun getting your boobs out,” the note read. “Love, Luna!” Chrissy was so touched by the letter, she shared it to her Instagram on June 11, captioning the pic, “Surgery went perfectly! So so so so so sore but waking up to this made it go away for half a minute at least.”

Clearly, Chrissy and Luna have an incredibly close bond. They even love dressing up together! But they’re not the only famous mother-daughter duo who love to twin. Check out the gallery above to see more images of famous mother and daughter pairs — like Kim Kardashian with North West with Beyonce and Blue Ivy — twinning!