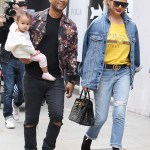 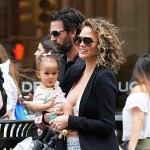 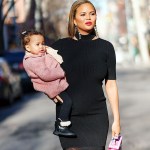 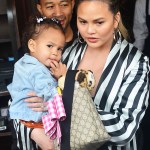 Chrissy Teigen and John Legend’s four-year-old daughter, Luna, proved how fearless she is when her mom snapped a photo of her little girl balancing a lizard on her forehead!

If only we had an ounce of the bravery that Chrissy Teigen and John Legend‘s daughter, Luna, has! On May 25, Chrissy captured her four-year-old daughter sporting a funny face while a lizard crawled along her noggin. In the image, which the Cravings author, 34, shared to her Instagram account, Luna pursed her lips to make a kissing face while a lizard balanced itself on her forehead, with its tail dangling just in front of the youngster’s eyes, nose, and mouth! Unlike any Herpetophobic person — someone with a fear of reptiles, lizards and snakes — Luna remained cool, calm and collected, as if the lizard wasn’t even there!

A number of Chrissy’s followers were so impressed by the four-year-old’s poise under pressure, and took to the comments to dole out their praise! “She’s so brave! I would be screaming like crazy,” one fan commented on the image. Another admirer chimed in to comment on Luna’s “Lizard lips! Did I get it? What do I win??” Finally, two fans summed up the picture perfectly, saying that Luna’s mug was totally “fearless” and that the youngster is “gonna be a force to be reckoned with just like [her] mama!”

If this latest post wasn’t evidence enough, it’s quite clear that John and Chrissy are finding the most creative ways to entertain their daughter and son, two-year-old Miles, while they safely quarantine together in California. In fact, at the end of March, Chrissy and John cordially invited friends, family, and fans to tune-in to the Instagram live wedding ceremony of Luna’s two stuffed animals — Chloe and Nosh. The lovely, impromptu ceremony was captured on Chrissy’s own IG account, featuring the mother-of-two officiating the wedding while John, in his pajamas, watched on from his seat.

“Thank you for gathering here today, on this very special day,” Chrissy began the ceremony. “The sun is high, it’s a beautiful day, well deserved in what has become 26 weeks of an incredible relationship. Who knew that Chloe and Nosh would get along so well? They’ve loved each other since the first second they laid eyes on each other, and they’ve never spent a night apart.” It was such a cute occasion for the young family, and so fun to incorporate their devoted fans! Talk about making the most of quarantine!