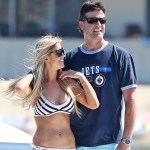 Having announced their separation less than two years after tying the knot, we’re looking back at the timeline of Christina and Ant Anstead’s relationship.

Ant Anstead, 41, and Christina Anstead (El Moussa), 37, have called it quits after 21 months of marriage. The HGTV star made the surprise announcement on her Instagram page on September 18, writing, “Ant and I have made the difficult decision to separate. We are grateful for each other and as always, our children will remain our priority. We appreciate your support and ask for privacy for us and our family as we navigate the future.” The mom-of-three shares baby Hudson London Anstead with the British TV presenter, and has two children from her previous marriage to her Flip or Flop co-star Tarek El Moussa, 39. Take a look back at the timeline of Christina and Ant’s love story.

October 2017: Although fans didn’t know it at the time, Christina and Ant first began dating back in the Fall of 2017. The reality TV star opened up about the early days of their relationship one year later, writing on Instagram, “A year ago today @ant_anstead called me for the first time and we spoke for 29 mins two days later while he was at Sema he FaceTimed me (I was thinking who FaceTimes) anyways I answered and we spoke for 2.5 hours … two days later we met for the first time and we’ve been inseparable ever since. #FATE.” So sweet!

January 2018: The couple sparked romance rumors when she posted a selfie on January 1, congratulating him on the premiere of his TV series Wheeler Dealers. They confirmed their relationship shortly after, and he began making appearances on her Instagram page.

June 2018: Christina revealed in a new interview that her ex-husband Tarek had given her new BF the tick of approval. “Tarek likes him,” she told Us Weekly. “What’s not to like? Everybody likes him. He’s a great guy. This is by far the happiest I’ve been in a while. I’m really excited about the future.”

December 2018: Surprise! Having never announced their engagement, the couple said “I do” in a secret winter wonderland wedding on Dec. 22 at their house in Newport Beach, California. The secret ceremony involved 70 of their closest friends and family, who weren’t told about their upcoming nuptials until they walked down the aisle. In fact, they were there under the impression that they would all be going to the Newport Beach Christmas Boat Parade via a charter bus.

March 2019: Just a few months after tying the knot, the couple made another surprising announcement — they were expecting a baby! She revealed the pair would welcome their first child together in a sweet Instagram post. “@ant_anstead and I are so excited to announce #babyanstead coming this September,” she captioned a pic of them holding an ultrasound. “The kids are all so excited to meet their new sibling #5 #Gonnaneedabiggercar.”

September 2019: The couple welcomed their son Hudson on September 6, sharing the sweet news via social media. “Our hearts are SO full of love and joy!” Christina wrote on Instagram. “Our healthy baby boy was born this morning- 9/6/19 – 7 lbs 7 oz 19.5 inches long.” Both parents already had two children from previous relationships, and baby Hudson made them a family of seven!

September 2020: One year after welcoming their bub, the couple sadly announced they had called it quits. It seemed like Christina finally had her fairytale ending, following her split from first husband Tarek — she even took her British beau’s last name. Nevertheless, the couple assured fans they were putting their children’s needs first, and asked for privacy as they navigated the break up.