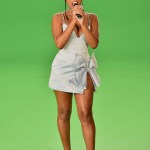 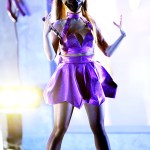 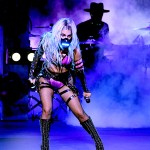 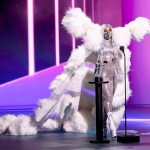 Lady Gaga looked like she arrived from the planet of Chromatica in caged lingerie outfits and one space-themed jumpsuit on the VMAs stage!

Lady Gaga, 34, looked out of this world while performing at the 2020 MTV Video Music Awards — literally. The singer changed into a total of three outfits throughout her VMAs performance, each one suitable to wear on the planet of Chromatica (AKA, the name of Gaga’s new album that earned her nine nominations at the VMAs). To get the on-stage party started, Gaga kicked off her medley in a caged lingerie set made of a neon green latex as “Chromatica II” played, before launching into the lyrics for “911.”

Gaga kept the bondage theme going with a similar lingerie look — this time, in a metallic purple shade — for her highly-anticipated performance of “Rain On Me” with Ariana Grande. Metal studs, black latex elbow gloves, a digital analog face mask and platinum wig made this outfit extra edgy! Ariana made sure to complement her collab partner in a bralette and circle skirt that were as equally purple and intergalactic.

And finally, to close out this powerful medley with a performance of “Stupid Love,” Gaga stepped into an outfit that we can only describe as a space suit. Gaga looked ready to direct the Star Trek crew in the bedazzled latex piece, which featured an array of purple shades. It was also the perfect outfit to play on a brain-shaped piano, which is exactly what Gaga did!

The singer gave us a tease of this outer space theme when she made her entrance on the VMAs red carpet in an outfit that was half astronaut suit, half dress thanks to an aluminum-like material. Gaga completed this astronaut-inspired look with a face bubble shield (of course, Gaga would find a way to put her own unique twist on face masks). She topped off the look with a Gaga signature: gogo boots.

Gaga’s VMAs outfits gave us a flashback to the latex outfit that she wore in the “Rain On Me” music video, which looked straight out of a retro science fiction flick and was designed by Laura Pulice (the founder of Vex Latex). Such a grand show required dedicated preparation — Gaga soaked in a bone-chilling ice bath to, ironically, warm up for her appearance at the 2020 VMAs.

It has been seven years since fans last saw Gaga perform on the VMAs stage (even if these circumstances are a little different). The A Star is Born actress kicked off the 2013 show with a track from her ARTPOP album, “Applause,” and we’re still clapping all these years later!

Gaga has a long history with the VMAs, receiving her first slew of nominations from the 2009 show for songs from her debut studio album, The Fame. However, she last took home awards from the 2011 event, making this year a big one for Gaga. Thanks to her new album Chromatica, which dropped in May of 2020, Gaga was nominated in nine categories: “Artist of the Year,” “Video of the Year,” “Song of the Year,” “Best Collaboration,” “Best Pop,” “Best Cinematography,” “Best Visual Effects,” “Best Choreography” and “Best Quarantine Performance.” She ended up taking home the awards for “Artist of the Year,” “Song of the Year” and “Best Collaboration”! Gaga was not only honored as a musician, but as an actress and philanthropist as well with the VMAs’ inaugural “Tricon Award.”

Gaga’s personal life has also been expanding. She started seeing someone new, Parker Foundation Executive Director Michael Polansky in the beginning of 2020,  and a source EXCLUSIVELY told HollywoodLife in April that “this pandemic has has accelerated their relationship” since they chose to quarantine together.