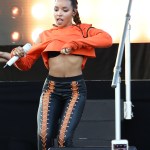 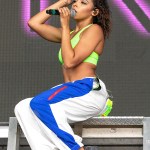 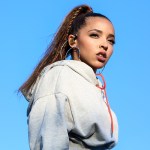 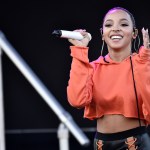 ‘Mask on, mask off.’ Days after joining R&B duo THEY. to channel some early 2000s R&B, Tinashe decided to share some of her own music with a colorful video for ‘Rascal (Superstar)’.

It’s a good time to be a Tinashe fan. Eight months after releasing her Songs for You album, the 27-year-old R&B singer returned with not one, but two tracks. While her collaboration with THEY. was all about bringing it back to the turn of the century, her song “Rascal (Superstar)” is more about bringing that attitude. Oh, and she certainly brought it in the colorful Marie Antoinette themed video.

The video opens with the star lying in a pink bed, covered in satin sheets, as she proceeds to get ready for the day. It turns out blonde Tinashe has a closet full of old fashioned lingerie and gorgeous tulle gowns, which she models throughout the fun and sexy video, directed by Jasper Soloff. “I can’t save you if you just sit on the wave /  They should pay me, how they copy what I say / They don’t know the road that we’ve been on / B-tch that ain’t a joke, I’m a villain / I’m in first place, need a ribbon / They don’t understand that I’m the sh-t,” she raps, per Genius. Just like the infamous French princess, Tinashe is seen enjoying a pink-frosted cake, complete with a drizzle of sprinkles.

“Y’all have been begging me to drop this record ever since I teased it on LIVE some months back. In the spirit of Songs For You y’all know wtf time it isssssss!!!” Tinashe tweeted on July 16, hyping up her fans ahead of this release. “I LOVE YOU ALL SO SO SO MUCH and I am SOOOOO THANKFUL for you guys every single day. All these songs for you, baybeeee”

“Rascal” arrived days after “Play Fight,” an early 2000s R&B nostalgia jam from Los Angeles-based duo THEY. It marks the first single from their second full-length project, The Amanda Tape, and they told The Fader that it was “special” for them to partner with Tinashe on the song. “This one definitely draws from a lot of the feel-good summer records from the early 00’s. We love songs that have both the male and female perspective, like Ja Rule and Ashanti, or Nelly and Kelly Rowland,” they continued. “We’ve been fans of Tinashe for a minute and once she sent her verse back over to us we knew we had something special.”

It’s unclear if “Rascal (Superstar)” is a product of her Songs for You sessions if it’s a track cut from Nashe – an album based on Tinashe’s rebellious alter-ego that was ultimately shelved – or a sign of a new project. Whatever it is, it’s an indication that Tinashe’s focus is on the future. She actually started off 2020 talking about the past, specifically recounting the day she saw her ex, Ben Simmons, move on with Kendall Jenner. “It may have been the worst day of my life, but it’s okay,” Tinashe said during the ROC NATION Grammy Party on Friday, Jan. 24. “I drank for like six months after that! Are you kidding me? I was like wasted for months. But I’m okay now. It was terrible. It was bad. Like it was bad, but I’m good now.”