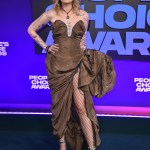 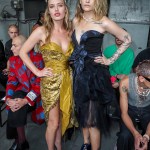 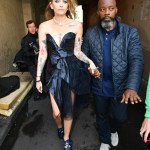 As Paris Jackson begins her music career, the daughter of the Michael Jackson revealed how ‘supportive’ he was when he was alive, and how he was always encouraging her to ‘do what makes you happy.’

“No matter what it was we were interested in, at one point, I wanted to be an astronaut, he [Michael Jackson] was like, ‘Do it. Do it,’ ” Paris Jackson, 22, said to ABC News’ Chris Connelly during the July 14 episode of Good Morning America. Paris, as one-half of the indie-folk band The Soundflowers, has followed in her father’s footsteps, and during the GMA chat, she spoke about how encouraging Michael was when he was alive. She also shared the advice that he gave, words of wisdom that she follows to this very day.

“You know, ‘Educate yourself as much as possible, then go with it,'” Paris told Good Morning America. “With every aspect of life, it was just supportive … I think we were really lucky to have that. ‘Just do what makes you happy and do it well.'”

“It wasn’t until the last, like, couple of years where I started calling myself a musician and embracing that you know, the feeling that I think I was born to do this,” said Paris. “I originally started writing music for myself, just as, like, just to get things out, to purge. It just feels good to… share it. It feels like, not butterflies in your stomach, but in your heart.” It wasn’t until that she met her boyfriend and future-creative partner Gabriel Glenn that she decided to pursue music seriously. The duo formed The Soundflowers, and on June 23, they released their self-titled, five-song EP.

Paris also said how her older brother, Prince Jackson, 23, has been a devoted supporter and influence on her creative direction. “He’s everything to me, you know? I’ve always looked up to him and always wanted his approval and everything, and wanted to be more like him,” Paris said. “So to hear him approve, not just approve but enjoy what I do, it’s everything to me.”

“I remember when my sister first played ‘Geronimo’ for me,” Prince told Good Morning America, referring to the Soundflowers song. “I can hear and feel all the emotion and pain and hurt that went into that song. I just remember thinking that, you know, this was a song, I think, that other people could … relate to, but other people needed to hear.”

Paris’s musical journey is also captured in the Facebook Watch docuseries, Unfiltered. The series offers a personal and intimate look at Paris and Glenn’s relationship, both romantic and musical. It even discusses her fraught relationship with the press, something that she seemingly “inherited” from her father.