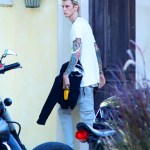 After Machine Gun Kelly grabbed coffee with Megan Fox – who was recently spotted out and about without her wedding ring – the rapper treated his adorable preteen daughter to some takeout.

Getting caught in the crossfire of other people’s drama apparently works up an appetite. Machine Gun Kelly, 30, was seen taking his 12-year-old daughter Casie Baker out for dinner in Los Angeles on Sunday, May 17. It was the first time the rapper was spotted in public after getting some coffee and grub with Megan Fox, 34, the day before. During this daddy-daughter date, the young Casie rocked a red facemask and a pink Nirvana tee. Her father donned a black facemask after picking up their order, which went well with his white t-shirt, and black God Bless FA sweatpants.

As mentioned, on Saturday (May 16, Megan’s birthday), the Transformers star was seen in the passenger seat of MGK’s Aston Martin while they were getting coffee and some food-to-go. Once they got their orders, TMZ reports that they drove back to her home in Calabasas. On the same day of the MGK-Megan meet-up, her husband, Brian Austin Green, 46, posted a very eyebrow-raising cryptic message to his Instagram. He shared a picture of a monarch butterfly and a caption that read, “Eventually, butterflies get bored sitting on a flower for too long. They start feeling smothered. It’s a great big world, and they want to experience it.”

The first sign that there was trouble at home between Megan and Brian came on May 14. She was spotted picking up food from the healthy grocer Erewhon in the Calabasas area and stopped to pick up a drink at a local coffee shop. During both visits, her wedding ring was nowhere in sight. Megan and Brian have been married for a decade now, and they have three children together: Noah Shannon, 7, Bodhi Ransom, 6, and Journey River, 3.

Brian, Megan, and their kids were all last seen together on March 28, when they picked up some ready-made meals at Erewhon Market. Brian, for his part, has also been seen with and without his wedding band. He didn’t have the ring on while stopping by Vintage Grocers in Malibu, California, on April 17, but the ring was back on his finger when he went for a supply run on May 2. If there is some trouble in paradise, this wouldn’t be the first time. The couple was on their way to a divorce in 2016 before her third pregnancy. They ultimately reconciled and revitalized their love with a romantic getaway to Hawaii.