Kelly Ripa, 49, is very strict when it comes to her diet and exercise, and she’s sharing her healthy habits with fans in a brand new video for Harper’s Bazaar. Kelly took park in the mag’s Food Diaries: Bite Size series, where she listed off everything she eats in a typical day. The talk show host starts her day with a cup of water, mixed with powdered greens. “It’s for alkalining your digestive system,” she explains. After that, she has coffee mixed with ghee, and takes her morning supplements (a foundational vitamin, multi-vitamin, ginger and a probiotic).

The 49-year-old goes on-air for Live With Kelly & Ryan at 9:00 a.m., and admittedly doesn’t put anything in her body that she has to chew before doing the show. After the show, she cuts up a green apple and blends it with two tablespoons of almond butter and a teaspoon of cinnamon to “eat like a porridge.” After that comes a workout, which Kelly admittedly does seven days a week. “My body wants to work out typically when I am at work,” she explains. “Most people that write into our show or DM us will always say…I watch your show while I’m at the treadmill at the gym, and I think to myself, that makes sense because if we have a pre-taped show, I will watch it while I work out at the gym.”

After working out, Kelly indulges in “brunch,” which consists of a big salad of microgreens with avocado and toasted nuts, which vary based on the day depending on what she’s in the mood for. Dinner is a “smaller version” of this salad, along with mixed grilled greens (or whatever other vegetable is in season) and a plant-based protein. Snacks throughout the day include “handfuls of nuts,” including raw almonds, raw cashews and raw pistachios. She also favors a chocolate chia pudding, and has ginger tumeric tea before bed. 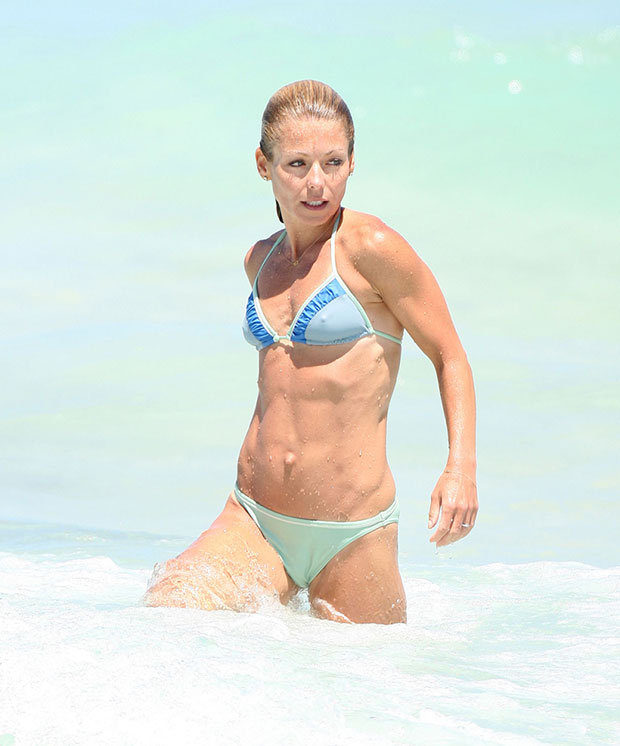 Cheat meals are a no-no for Kelly, though. “Cheat meals lead to a cheat lifestyle,” she says. “At my age now, I find that it takes too much effort to get ready, so I just stay ready.” Of course, there are exceptions, like birthdays and Christmas!