Hannah Brown’s heart is with her ex, Tyler Cameron, following his mom’s death. The Dancing With the Stars winner left a red heart emoji comment on Tyler’s Instagram post, where he confirmed that his mother, Andrea Cameron, had passed away on March 2. Hannah met Tyler’s mom during hometown dates on The Bachelorette in 2019, and they got along very well. Although Hannah and Tyler’s relationship ended during The Bachelorette finale, they left things on good terms when they reunited at After the Final Rose in July, and he even spent the night at her house. However, they did not reconcile a romantic relationship, and instead, remain friendly. Like so many others, Hannah was clearly devastated to hear the news that Tyler lost his mom so suddenly.

The Florida native first let fans know that something was going on with Andrea via Twitter on Feb. 27. He announced that he had a family emergency and would have to cancel a previously-scheduled event for the morning of Feb. 28. He also asked for “prayers” for his mom, but did not reveal what her condition was. On Feb. 29, reports surfaced that Andrea had passed away, and Tyler confirmed the news on March 2. “Today heaven gained an angel,” he wrote on Instagram. “We will love and miss our mother dearly. She will live on through us and those she had an impact on. While we grieve, we ask for two things: First, tell those you love that you love them, and second, please let us take this time to celebrate her life in private. Thank you for all your love and support.”

Tyler received thousands of comments on his photo, including dozens of supportive messages from other Bachelor Nation stars. “Sending all the love y’alls way,” Hannah Godwin wrote. Ben Higgins added, “I’m sorry man, so sorry,” and Katie Morton said, “I can’t tell you how sorry I am. Sending you guys all of the love and prayers in the world.” 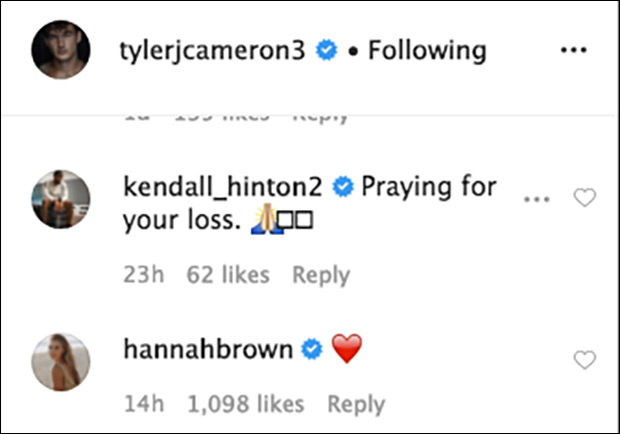 Tyler was the runner-up on Hannah’s season of The Bachelorette. She chose Jed Wyatt over Tyler during the final rose ceremony, but she and Jed ended their engagement after just a few weeks. Meanwhile, after Tyler and Hannah’s reconciliation at After the Final Rose, he briefly dated Gigi Hadid for two month, before calling it off in October 2019.