You may not go trick-or-treating with your little one this Halloween, but that’s no excuse to skip dressing up! HollywoodLife has found the cutest Halloween costumes for babies — and infant Halloween costumes! — so that your child can be the star of your spooky Zoom party or drive-by costume parade. We’ve taken inspiration from celebrity children like Molly Sims‘ daughter, Scarlet, who looked so precious as a miniature rainbow strapped onto her supermodel mom during a past Halloween.

Justin Timberlake and his son Silas, whom the *NSYNC alum shares with ex-wife Jessica Biel, also deserve an honorable shout-out! To go trick-or-treating around their Tribeca neighborhood in New York City for Halloween 2018, the father-son duo dressed up as the Lego version of Batman and Robin (the Lego Batman Movie had been a huge hit in theaters the year prior).

Whether your looking for a one-of-a-kind costume (like the rainbow costume Molly’s daughter wore) or a pop culture reference (like Justin and Jessica’s son’s Lego Batman getup), we’ve found all kinds of baby costumes to make Halloween 2020 a memorable one. And if your child is no longer a newborn, no worries — we’ve also included infant costumes, since many of the options below come in a great range of sizes for children up to two years old. Check them out here, and remember — no one’s ever too young (or too old) to celebrate Halloween. With that said, we’ve also included suggestions of complementary costumes that you can wear with your baby!

Don’t deny it — the “Baby Shark” song is probably still stuck in your head! Now, you can have an actual baby shark with this adorable costume from Underwraps Costumes. If your baby can’t walk yet, this costume is especially perfect since it’s designed in a bunting style and will keep your newborn safely bundled up. This goes without saying, but you can dress up as “Mommy Shark” or “Daddy Shark” (or the grandparent shark — whoever’s doing the Halloween shopping this year). $29, target.com 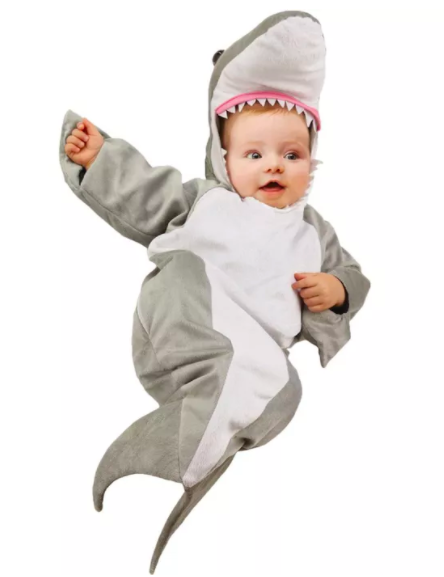 UglyDolls was a hit among children when the animated movie arrived in theaters in 2019. Gwen Stefani and Blake Shelton even brought Gwen’s three sons — Kingston, 14, Zuma, 12, and Apollo, 6 — to the film’s premiere in Los Angeles in April of that year! Now, your baby can dress up as Moxy, who was the UglyDolls’ leader voiced by country music legend Kelly Clarkson! There are many more plushies in the UglyDolls crew, making this an easy costume for you (and even more family members) to coordinate with your little one, if you feel like dressing up as a fellow UglyDoll too. This ultra-cozy costume comes in two sizes, for children ages zero to 12 months old. $25, target.com 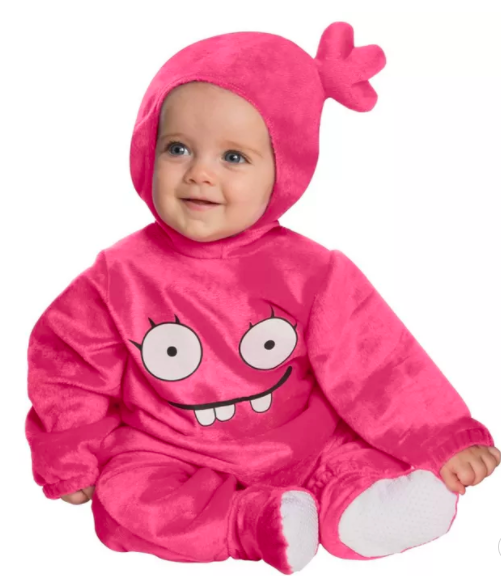 If you love avocados, why not transform your infant into one? Your little one will be oh so comfortable in this jumpsuit from Carter’s, which even comes with a hood for the stem and leaf! Dress up as a piece of toast and boom, you’ve got an excellent mommy-and-me (or daddy-and-me) costume. $40, amazon.com 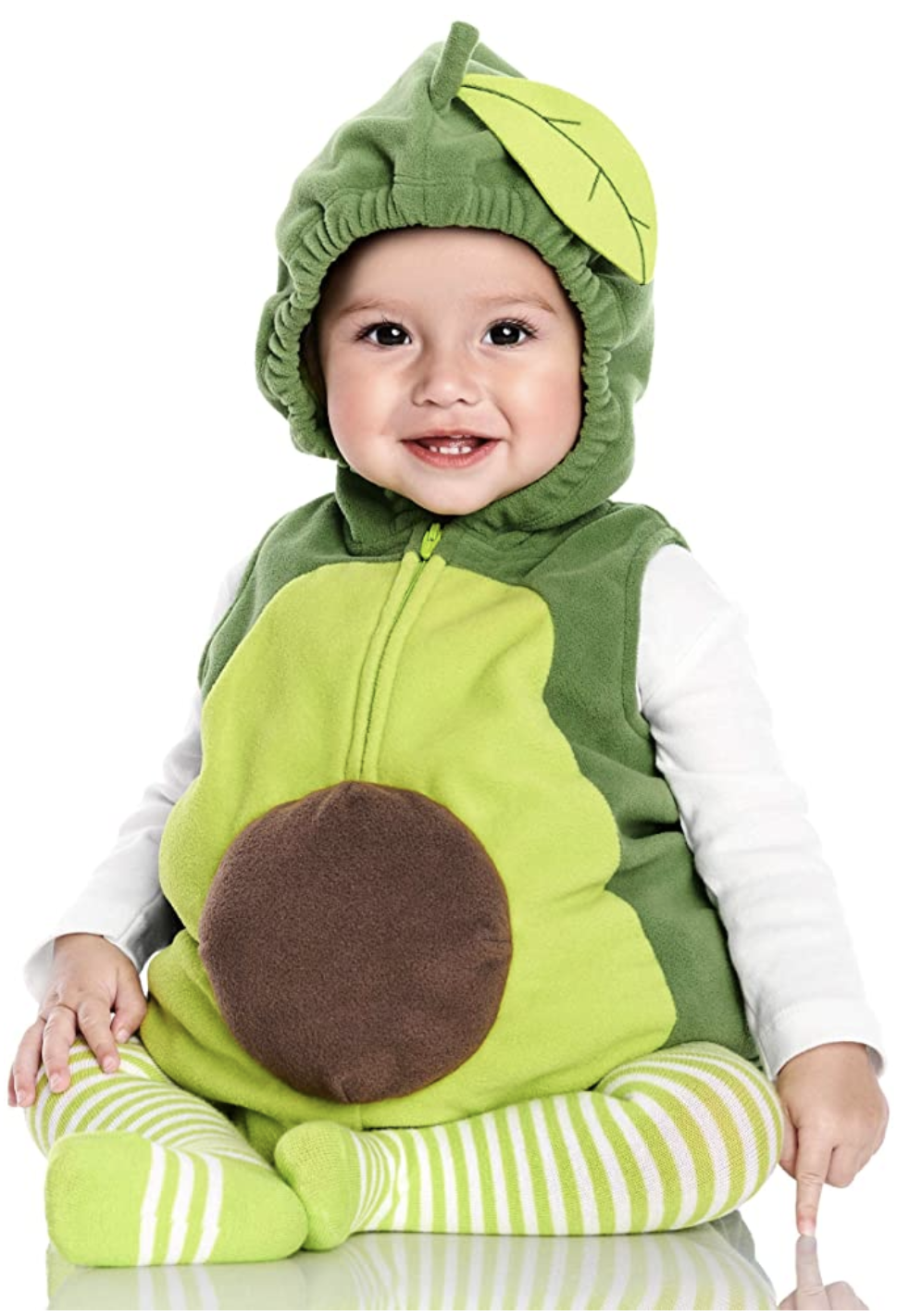 Pay homage to classic children’s movies like Surf’s Up and Happy Feet with this adorable penguin costume from Rubie’s designed for infants! You can dress up like a bottle of Coca-Cola to be extra cutesy — remember those commercials? $28, target.com 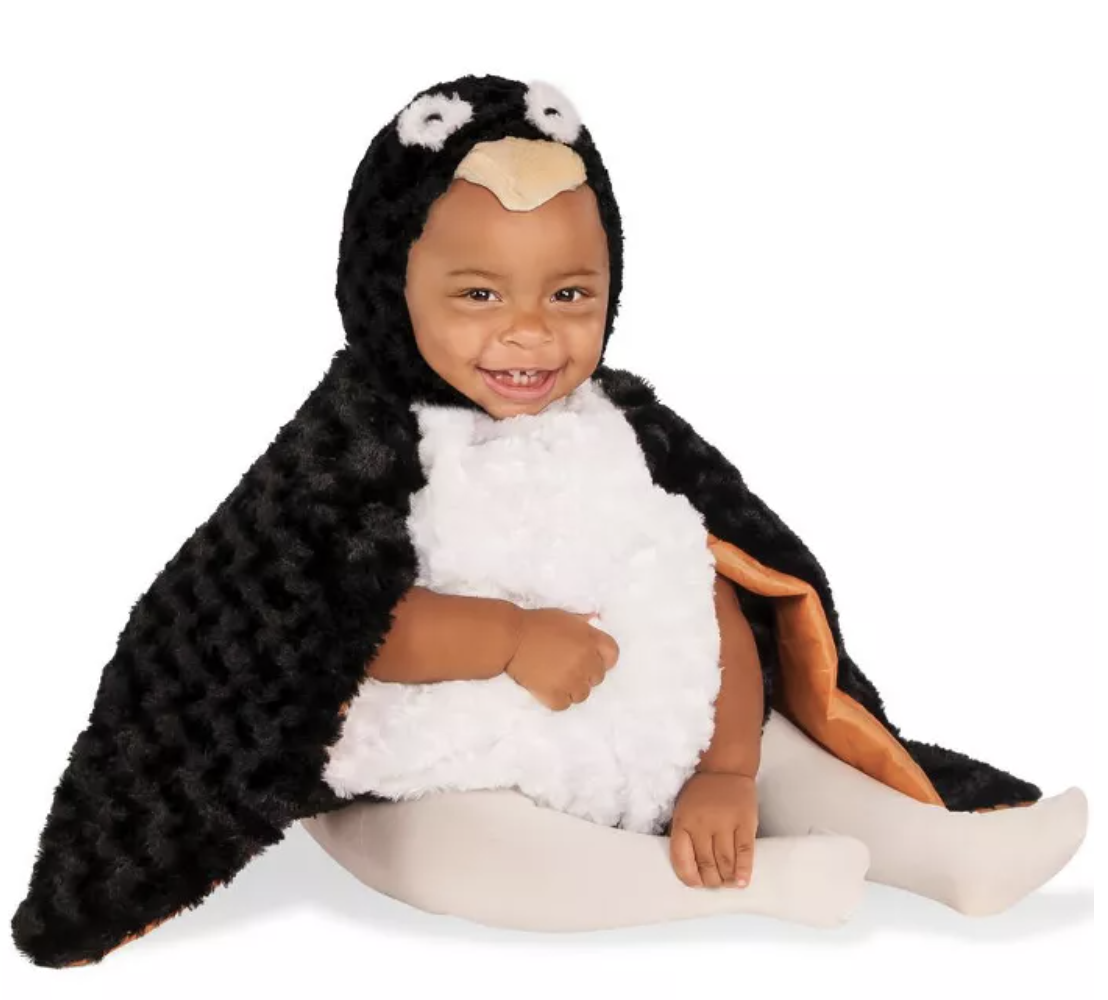 There are countless option for Batman costumes out there, especially now that the new Batman film starring Robert Pattinson is arriving soon in 2021. Girls love D.C. comics too, though, which is why we love this Batgirl costume from Rubie’s! Dress up like Harley Quinn from Birds of Prey, and you’ll make the perfect girl-power duo. This costume is designed for infants ages six to twelve months old. $26, target.com 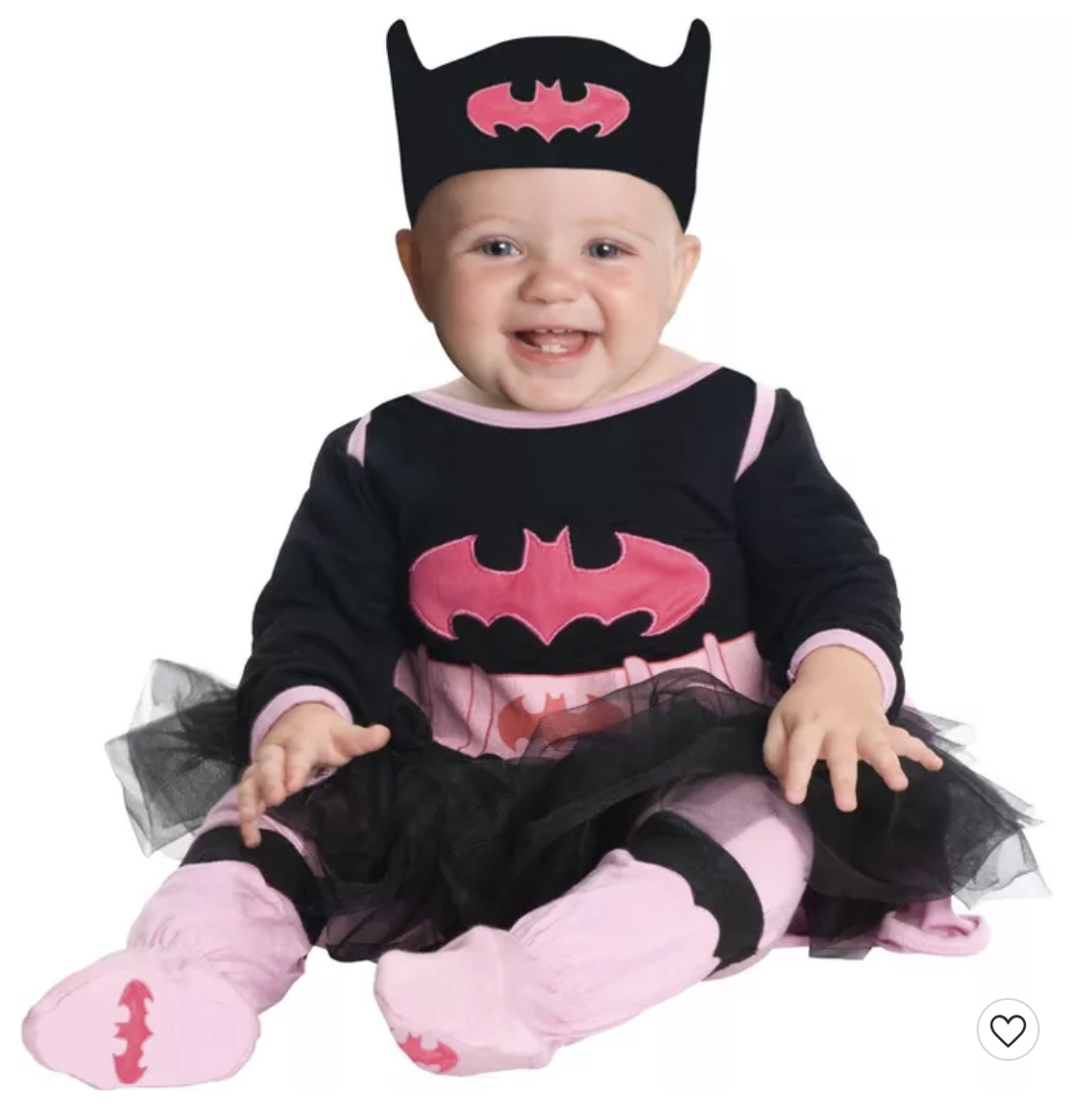 Is your baby hatching into a T-Rex…AKA, approaching the terrible two’s? This costume from Rubie’s is perfect, then! The 100 percent polyester costume even comes with Universal Studio’s official Jurassic Park logo, meaning you can also dress like a paleontologist from the movie (or a dinosaur handler) to make this a duo costume. $18, amazon.com 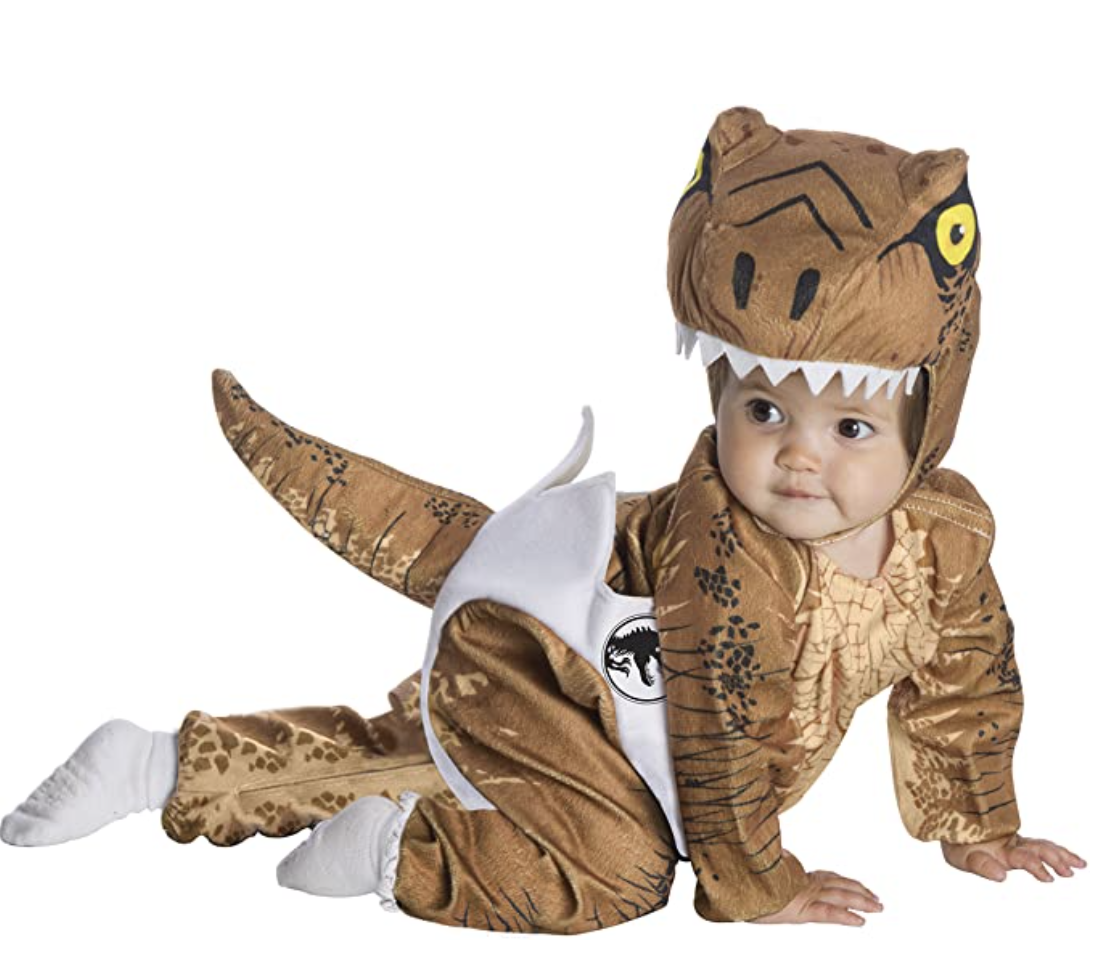 Your child will be as free as a butterfly in this pull-over style costume from Hyde & EEK! Boutique. You won’t have to mess with multiple parts while dressing up your child, making your life easier as well. The butterfly pullover is available in sizes for children ages 0 months to 18 months. You can dress up like a big flower! $20, target.com 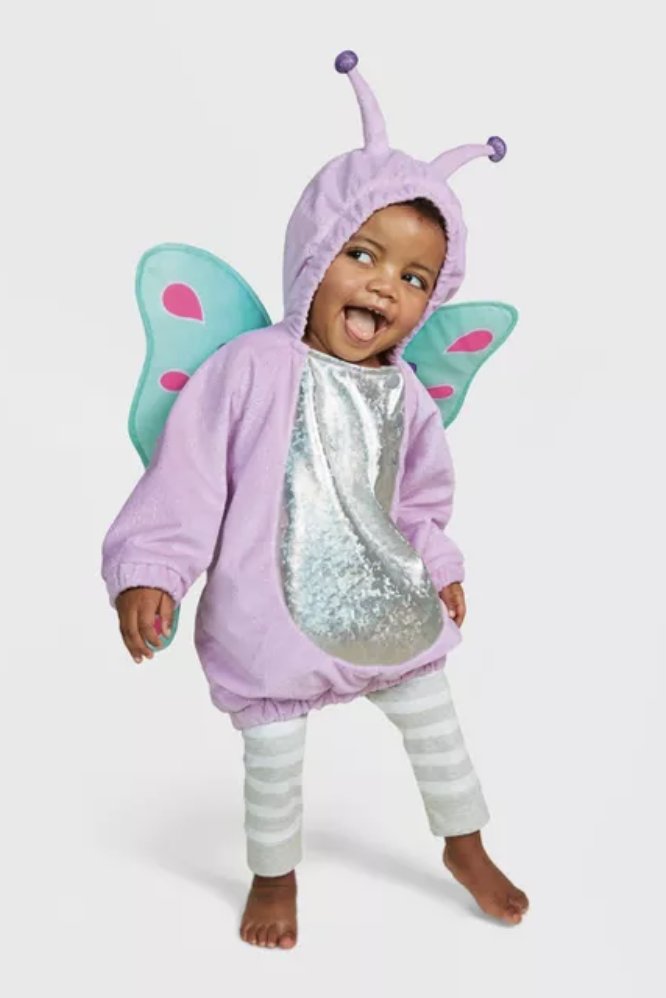 This will be the first Halloween after How To Train Your Dragon came out with its last film in Dec. 2019. So, there’s no better time to dress up as the movie’s star Toothless, the beloved Night Fury dragon of the popular animated movie series. The costume comes with everything, including the wings, and features a 100 percent cotton lining to ensure your dragon lover is cozy all night long. The costume is available for children ages six to 24 months old. If you have twins, you can also buy the Light Fury baby costume counterpart! $31, amazon.com 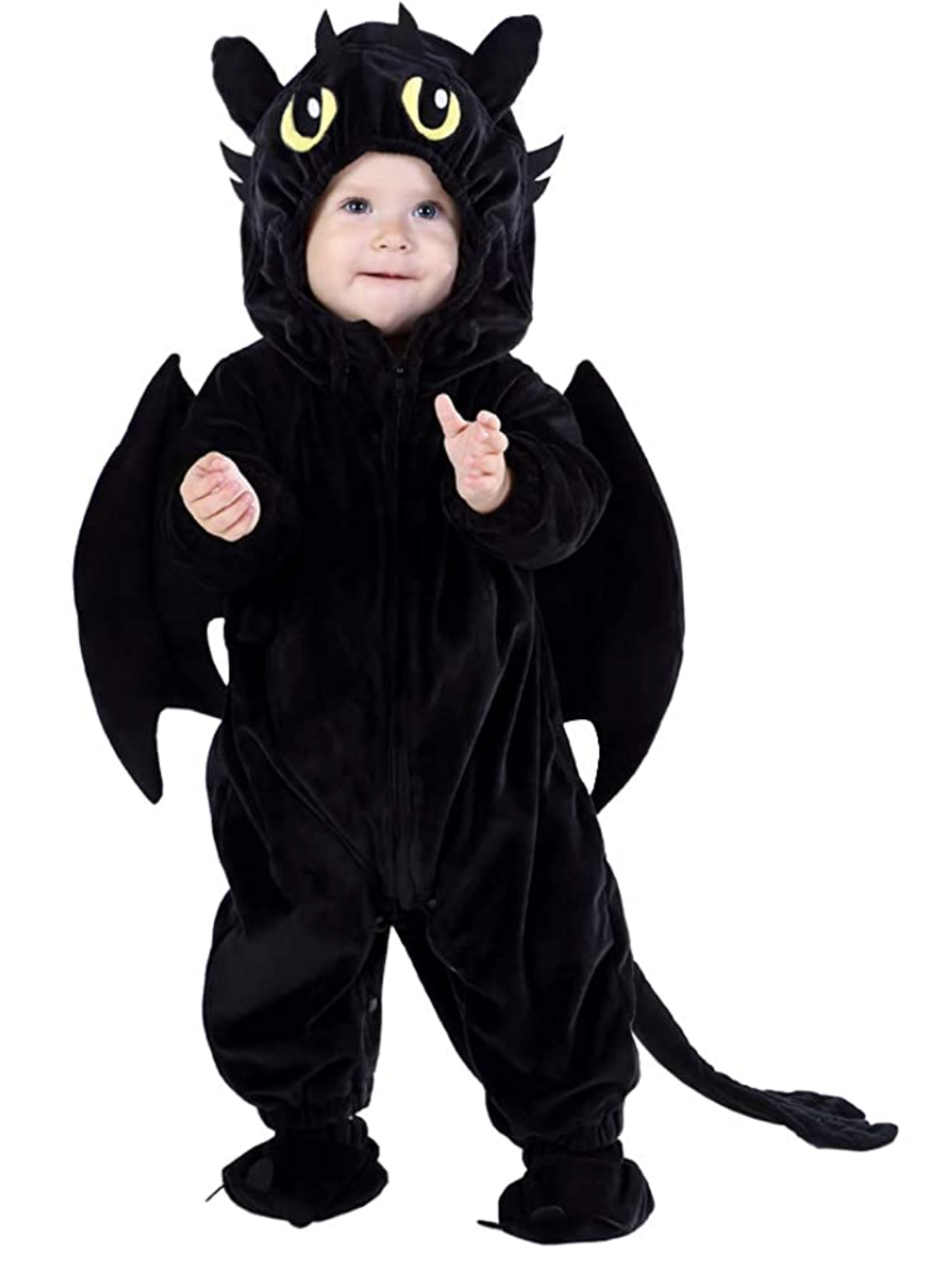 For the young one in your life that’s already showing a knack for technology (as in, watching TikToks and handling iPads), we’ve found the costume for your little genius! This retro-inspired costume from Hyde & EEK! It looks straight out of The Jetsons with its metallic silver finish, printed-on lights, and head antennae. It comes as a two-piece set with the robot top and helmet and is available in three sizes for children zero to six months old, six to 12 months old, and 12 to 18 months old. Make your own robot helmet out of tinfoil to match! $20, target.com 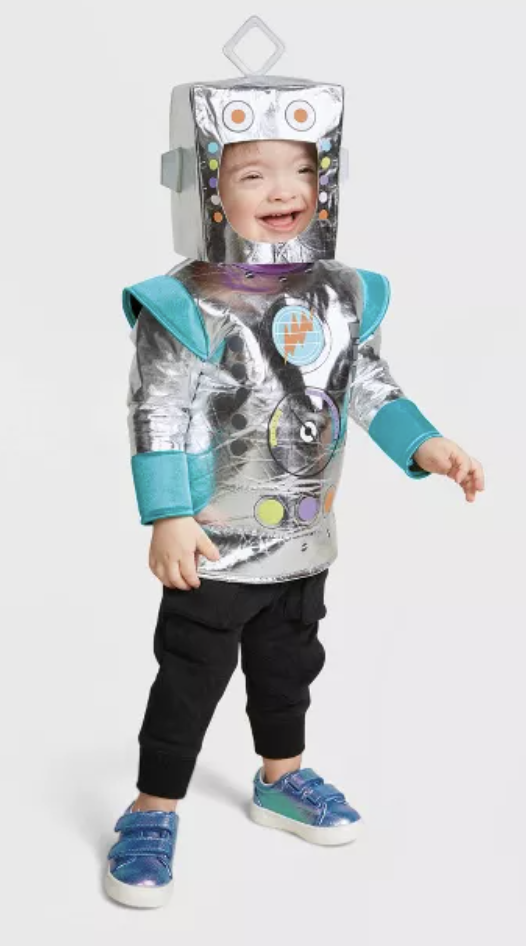 Okay, so this is technically a sunflower costume. But with a little imagination, it can also be seen as “Baby Sun” from the Teletubbies! You would win your Zoom Halloween party’s duo costume contest by dressing up as Kylie Jenner. As many will recall, the Keeping Up with the Kardashians star sparked a viral “Baby Sun” meme in 2019 after sharing a video of herself singing “rise and shine” to her baby daughter, Stormi Webster). This costume is designed for infants ages 18 to 24 months old. $34, target.com 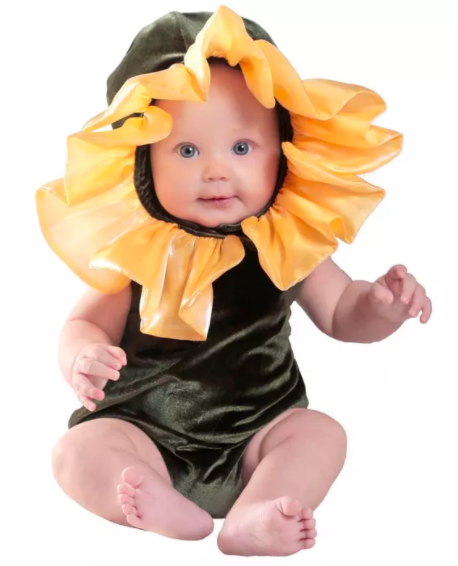