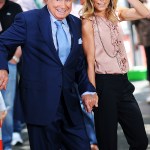 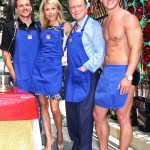 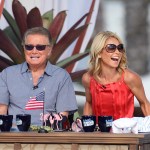 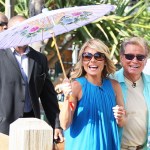 Regis Philbin died of natural causes just a month before his 89th birthday. Learn more about the longtime talkshow host who was best known for hosting ‘Live!’ with Kelly Ripa & Kathie Lee Gifford!

Regis Philbin passed away at 88 years old on Friday, July 24. “We are deeply saddened to share that our beloved Regis Philbin passed away last night of natural causes, one month shy of his 89th birthday,” his family confirmed in a statement on July 25. “His family and friends are forever grateful for the time we got to spend with him – for his warmth, his legendary sense of humor, and his singular ability to make every day into something worth talking about. We thank his fans and admirers for their incredible support over his 60-year career and ask for privacy as we mourn his loss,” they also said. Learn more about the legendary host who will forever be remembered.

1. He was the longtime host of Live! After getting his start in radio with The Regis Philbin Show — which started in San Diego back in 1961 — he continued to build up his resumé as a morning anchor. After moving around the country to cities like Los Angeles and St. Louis, ended up in New York City as a co-host on The Morning Show with Kathie Lee Gifford, 66. The show later became Live! with Regis and Kathie Lee until her departure in 2000. After a lengthy year-long search for his new co-host, then All My Children star Kelly Ripa, 49, filled the spot. Kelly and Regis co-hosted Live! with Regis and Kelly until he left in 2011 after an incredible 28 years.

2. He was the original host of Who Wants To Be A Millionaire. Outside of his talk show duties, Regis was also the face one one of the most popular game shows in recent decades. The intense quiz-based series made its debut on ABC back in 1998, and quickly became a national sensation. Regis was perhaps best known for his iconic line to contestants, asking “is that your final answer?” before they chose one of the four multiple choice options.

3. He was from New York. Regis was born on August 25, 1931 and raised in the New York City borough of The Bronx. He went on to graduate from Cardinal Hayes High School in 1949, pursuing his college degree in Sociology at the University of Notre Dame. He graduated in 1953 and served in the navy prior to pursuing a career in broadcast.

4. He was a dad. Regis is survived by daughters Joanna and J.J., who he shared with wife of 50 years Joy Philbin, 79. Prior to walking down the aisle with Joy in 1970, he was married to Catherine Faylen, with whom he shared daughter Amy and son Daniel. Daniel, who was born with a spinal cord defect, sadly died in 2014.

5. He received many accolades. Regis’ incredible career and accomplishments have been recognized by many in the entertainment industry! He was the recipient of Lifetime Achievement Award from the Daytime Emmy Awards in 2008, and also earned his own star on the Hollywood Walk of Fame in 2003.