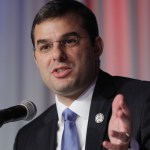 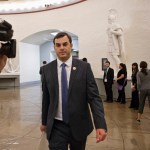 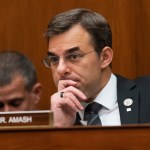 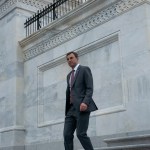 Michigan Congressman Justin Amash has thrown the 2020 presidential election for a loop by announcing he’s exploring running as a third-party Libertarian. We have five things to know about him.

Justin Amash just threw a wrench into the Donald Trump vs. Joe Biden presidential race. He’s thinking about giving voters a viable third option by running as a Libertarian candidate. The Independent Michigan congressman made the announcement on Apr. 28, 2020 that he’s formed an exploratory committee to make a third-party bid for the White House. The 40-year-old announced the news via Twitter, writing “Today, I launched an exploratory committee to seek the @LPNational’s nomination for president of the United States. Americans are ready for practical approaches based in humility and trust of the people.”

Justin continued, “We’re ready for a presidency that will restore respect for our Constitution and bring people together. I’m excited and honored to be taking these first steps toward serving Americans of every background as president.” We’ve got five things to know about Justin Amash.

1. Justin was a Republican who ditched the GOP in 2019. Justin has served in the U.S. House of Representatives for Michigan’s Third District since 2011. He was a Republican up until July 2019, when he left the party to become and Independent. He’s highly conservative, as he was one of the founding members of the House Freedom Caucus. The group consists of hard-core conservative Republican congressmen. Justin resigned from the caucus in June 2019 after calling for Trump’s impeachment.

2. Justin was the first Republican to call for President Trump’s impeachment. In May of 2019, Justin tweeted that “(Special Counsel Robert) Mueller’s report reveals that President Trump engaged in specific actions and a pattern of behavior that meet the threshold for impeachment,” about Trump’s dealings with Russia. On Dec. 18, 2019 as an Independent, he voted to impeach Trump over his threatening to withhold $400 million in approved military aid to the Ukraine unless he got dirt on Joe Biden and his son Hunter, 50. Justin noted that, “President Donald J. Trump has abused and violated the public trust by using his high office to solicit the aid of a foreign power, not for the benefit of the United States of America but instead for his personal and political gain” during a speech on the House floor.

3. Justin is married to his high school sweetheart. Justin met his future wife Kara Day when they attended Grand Rapids High School in Michigan. The pair married once they each respectively graduated from college. The couple has three children, a son and two daughters.

4. Despite being a Republican and an Independent in Congress, Justin has identified as a Libertarian. He has not seen his beliefs aligning with either the Republican or Democratic parties, and he has considered himself a Libertarian based on his strict constitutionalist views. He has spoken at the Libertarian-attended Freedom Fest, billed as the “World’s Largest Gathering of Free Minds.” In 2019 he made numerous appearances on smaller Libertarian news programs and podcasts to get his viewpoints out, leading many to speculate he could be contemplating a possible 2020 presidential run for the party.

We’re ready for a presidency that will restore respect for our Constitution and bring people together. I’m excited and honored to be taking these first steps toward serving Americans of every background as president.

5. The possibility of Justin entering the 2020 presidential race as a third-party candidate has not been received well, as many believe it will siphon off votes from Joe Biden and get Trump re-elected. Professor, author and former GOP member Tom Nichols tweeted, “There is zero chance – zero – that Justin Amash will win the presidency. There is plenty of chance that Amash’s votes will not come from Trump’s cult, but at Biden’s expense. There is a large chance this will reelect Trump. Thanks for being the new Ralph Nader.” Washington Post contributing columnist George Conway tweeted, “The only real effect Amash could have in this campaign is to enhance Trump’s chances. This is a terrible idea.” CNN commentator and author Keith Boykin tweeted, “This is ridiculous. Justin Amash has zero chance of being elected president. If this continues, he will likely become a spoiler who will help Trump win re-election.”

If you haven’t registered to vote yet, it’s time to change that. HollywoodLife and our partners at Rock The Vote have made it simple — just fill out the form below: