It may be the middle of winter, but short shorts NEVER go out of style, especially for celebrities. A trend that stars have come to love over the years is the combination of shorts with very high boots. This pairing gives off the power of short shorts by showing just the right amount of leg, while also allowing for some trendy and over-the-top footwear. 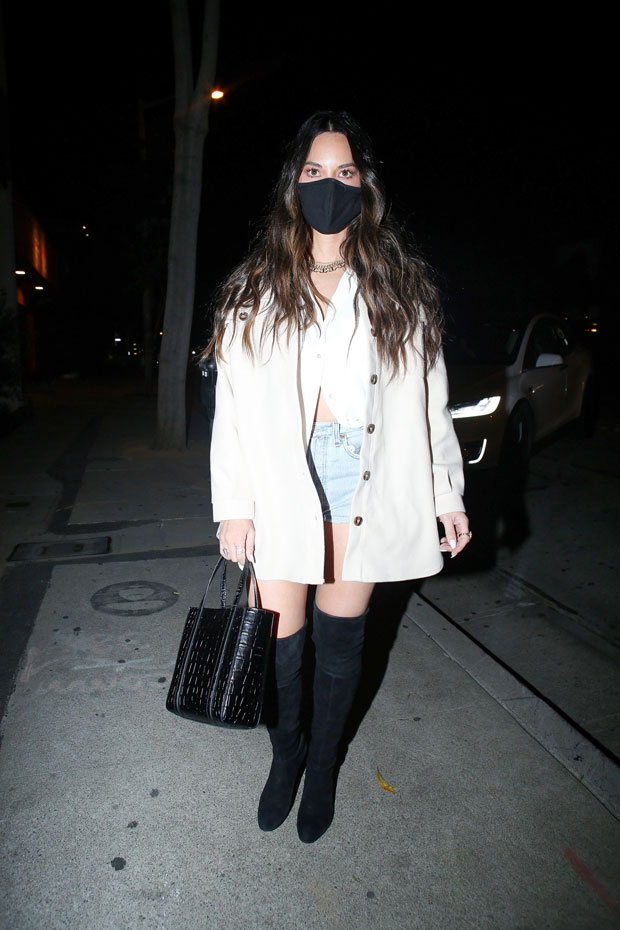 Olivia Munn recently rocked a pair of cutoff daisy duke shorts while stepping out for dinner in West Hollywood. The 40-year-old actress arrived at celebrity hotspot Craig’s restaurant on February 26, rocking a chic, casual ‘fit. She donned denim shorts, and thigh-high black boots, which she paired with a white button-down shirt and an oversized cream jacket. She accessorized with a small black purse and parted her long, wavy hair down the middle of her head.

Another star who has slayed in the shorts and boots trend is Chrissy Teigen. She was photographed leaving a spa while wearing some seriously fierce grey boots. They featured a high, thin heel and came all the way up to the model’s mid-thigh. She paired the boots with jean shorts and a button down shirt, which she wore hanging off one shoulder. There were also sunglasses and a big white purse, adding even more flair to the look.

She also rocked the look in a February 2020 Instagram photo. The Cravings mogul slayed in a leather blazer-style jacket, tiny black bike shorts, and knee-high boots, showing it off with a sassy ponytail flip. Chrissy accessorized with a shiny black tote bag featuring gold chain straps, oversized gold hoop earrings, and a fringed belt with a big gold buckle — very much like the belt former First Lady Michelle Obama wore to the 2021 inauguration. Simply perfection!

Gigi Hadid loved the shorts and boots pairing so much that she even wore it to her birthday party one year! The supermodel rocked insanely high, intricate black boots with an open toe and laces up the center. The boots went with high-waisted white shorts, which were paired with a silky black top. Gigi also wore a set of black and white chokers to accessorize the look, and had her hair pull back into a ponytail. Scroll through the gallery above to see even more stars rocking the thigh-high boot and short shorts trend!